February 23—Completion of the proposed Standard Gauge Railway link (SGR) between Malaba and Kampala, as part […]

February 23—Completion of the proposed Standard Gauge Railway link (SGR) between Malaba and Kampala, as part the overall network from Mombasa port, can help slash freight costs by two thirds and the Ugandan government is determined the $2.2 billion project takes off. 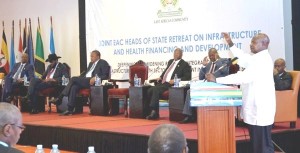 Museveni briefs the media as his colleagues look on after health and infrastructure talks in Kampala.

“Uganda is investing heavily in infrastructure development to achieve objectives of Uganda Vision 2040 such as a GDP per capita of $9500. With the completed SGR railway, transport will cost $8 cents per metric tonne compared to 21 cents per metric tonne on the road,” Museveni said during a media briefing on the sidelines of the 19th East African Community Summit held in Kampala. Museveni is the current EAC Chair.

President Uhuru Kenyatta from Kenya, Tanzania’s President John Magufuli and President Salva Kirr from and South Sudan were in Kampala to attend a infrastructure and health development retreat, which also featured presentations from Mukhisa Kituyi, the United Nations Conference on Trade and Development (UNCTAD) Secreatry General. He said accelerating the EAC’s industrialisation will depend on resilient infrastructure and energy systems. Burundi and Rwanda were represented by senior officials.

The two-day Joint Retreat was held under the theme ‘Deepening and Widening Regional Integration through Infrastructure and Health Sector Development’ in the EAC Partner States.

However, Museveni said his government was committed to have the SGR up and running and the Partner States have decided to maintain high budgetary allocations geared towards financing infrastructure development within their national borders. Uganda has yet to finalise funding for the SGR, but negotiations with the China Eximbank are at an advanced stage, depending on Kenya’s commitment to extend its SGR to Malaba along the border.

Reading out a communiqué, Uganda works and transport minister, Monica Azuba Ntege, who is also the Chairperson of the EAC Sectoral Council of Ministers for Transport, Communications and Meteorology said the ongoing infrastructure development projects were meant to interlink the Community and create a strong Common Market with sights set on the emerging the Tripartite Grand Free Trade Area that will cover most of Africa.

Ntege said in their previous three retreats focusing on Infrastructure Development and Financing the Heads of State had prioritized for implementation a total of 72 projects, split into 286 sub-projects over a 10-year period, ending in 2025.

The Minister said that upon the full implementation of the prioritized projects, the region will among other things have improved 7600 kilometres of road surface, laid 4000 kms of standard gauge railways, and increased the combined installed capacity of electrical power generation from 4245 MW to 6734 MW.

“We also hope to have constructed 3000 kms of oil pipeline and an oil refinery, and enhanced the performances of Mombasa and Dar es Salaam seaports and opened up new maritime and inland ports,” she said.

On road safety,  Ntege said East Africa had worrying statistics in terms of road fatalities as compared to the Africa and the rest of the world. According to the WHO, the average rate of global road fatalities in 2015 was 17 deaths for every 100,000 inhabitants. In Europe, this figure was 9.2 while in Africa it was 26.5 and current trends show that it is rising every year.

For example, compared with the 2.9 road fatality rate of the United Kingdom, the countries in East Africa have rates higher than even the African average, with Tanzania at 32.9, Rwanda at 32.1, Kenya at 29.1 and Uganda at 27.4.

Ntege said this means that concerted efforts need to be made both on the physical and non-physical causative factors. “It is reassuring to note that on the side of user behaviour, the EAC has recently developed standardized curricula for the training of commercial drivers which aims at instilling virtues like courtesy, speed perception and environmental awareness skills,” she said.

The Minister, however, said that Partner States should do more to instill and sustain proper behavioural competencies on all road users, including even law enforcement personnel, adding that percentage of accidents could be attributed to poor pavement and geometric road conditions and these should be addressed through infrastructure upgrading.

Ntege asked the EAC Secretariat to expedite the adoption of harmonized standards for road design and construction, by all the Partner States as directed by the Council and provide separations between motor cycles and vehicles.

“Resources should be mobilized to support the Partner States in the area of road safety to stem the tide of unnecessary deaths on our roads and reduce pressure on our hospital bed capacities now occupied by a large number of accident injury patients,” she said.

In his remarks, the EAC Deputy Secretary General for Planning and Infrastructure, Eng. Steven Mlote, said that infrastructure development was recognised as the prime mover of socio-economic development in the region and would therefore continue to receive the highest level of political support from EAC Heads of State.

Eng. Mlote said the joint retreat would assess the progress of implementation of previously prioritised projects and consider and approve new infrastructure projects for joint/coordinated development.