Museveni clashes with Governor over Bitcoin in Uganda

May 24, 2018 in Business, Finance, Financial Services, Policy by Editor

May 24, 2018—President Yoweri Museveni and Prof Emmanuel Tumusiime Mutebile, the Governor, Bank of Uganda (BoU), publicly disagreed yesterday on the merits of using cryptocurrencies as an alternative to conventional money in Uganda amidst a rapt gathering in Kampala.

Cryptocurrencies like Bitcoin, are digital currencies in which encryption techniques are used to regulate the generation of units of currency and verify the transfer of funds, operating independently of a central bank. At prevailing rates, one Bitcoin is the equivalent of nearly UGX29 million or some $7,700.

While Museveni suggested an open-minded approach which includes some flexibility on the part of the central bank, Mutebile strongly advised Ugandans to stay away from any dealings involving these currencies.

Also in attendance was Ameenah Gurib-Fakim, who until March 18 this year was President of Mauritius until she resigned. Since late last year, the State Bank of Mauritius (SBM), which has a dominant market share on the island, has been accepting crytocurrency as loan collateral. However across the continent, the attitude towards crytocurrencies remains either totally against or under preview as for example in Kenya. Worldwide, the trend is catching on fast with Japan being the biggest market for Bitcoin after it was designated a legal tender during April 2017.

Early last year, in a statement, the BoU warned ‘Whoever wishes to invest their hard earned savings in cryptocurrency forms such as One-coin, Bitcoin, Ripple, Peercoin, Namecoin, Dogecoin, Litecoin, Bytecoin, Primecoin, Blackcoin or any other forms of digital currency is taking a risk in the financial space where there is neither investor protection nor regulatory purview’.

Speaking during first day of the Africa Blockchain Conference in Kampala, Mutebile discouraged Ugandans from  such transactions which he said are vaguely uncontrolled and could lead to total loss of their investment.

He said no cryptocurrency can match a well-managed national currency. “They don’t have the privileges of the legal tender and are not backed by the Central Bank, which ensures that the supply of currency is always adequate to meet the demand,” he said.

The  Governor said, “There are no external mechanisms for backing cryptocurrencies to ensure that they have a stable value. Hence they are subject to extreme price volatility which renders them ineffective as a unit of account.”

He said cryptocurrencies such as Bitcoin allow cross border payments, which are made anonymously and can facilitate illicit transactions such as money laundering and the financing of crime.

“They also offer an avenue for speculation, but unlike other assets which attract speculators like gold or equities, cryptocurrencies have no intrinsic value. Their current value depends entirely on the subjective beliefs of cryptocurrency traders about what their future value will be,” he said. 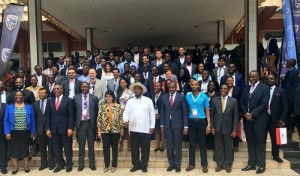 Museveni lines up for a group photo with guests and participants, but Mutebile skipped the opportunity.

As hundreds of participants and invited guests listened in dead silence, the Governor said, “In the long run, unless cryptocurrencies can command widespread acceptance as a medium of exchange, the demand for them will be negligible and their value will fall to zero.”

Blockchain is the technology that cryptocurrencies rely on. It basically entails a digital ledger in which transactions made are recorded chronologically and publicly. Described as an ingenious invention, this technology allows digital information to be distributed but not copied.

The Africa Blockchain Conference was organized by the Blockchain Association of Uganda in partnership with the Ministry of Information and ICT. Stanbic Bank Uganda is a major sponsor of the event.  Mutebile encouraged participants and stakeholders to instead focus on other ways in which block chain technology can be used, other than cryptocurrency. “Cryptocurrency and the technology that supports its — blockchain — are two different things,” he said.

Reacting Mutebile’s concerns, Museveni advised him to try to be open-minded and look at the advantages that may be provided by cryptocurrencies and block chain technology as a whole. He described Mutebile’s stern stand as ‘dogmatic’.

The President laboured to remind the Governor that the current ‘faith based’ currency which Mutebile was trying to defend didn’t exists years ago and only came as a result of the evolution of money. “I encourage the Governor to be more inquisitive and not to be dogmatic,” Museveni said to a chuckling audience.

He said, “Money itself changes. Up to 1930 some of the economies around the world had the gold standard. Money was initially gold and silver. In the Great Lakes region, we used cowrie shells, which we called ensimbi. After gold they introduced the fiduciary issue. From the gold standard, eventually we ended up with paper.”

The President went on to explain that cryptocurrencies, being faith based and depending an ‘open book of records’ (digital ledger), is likely to enhance transparency in businesses.

“Businesses globally are afflicted by business secrets. But this (crytocurrency) wants to remove the opaqueness in business and replace it with total transparency. If ledgers are open to all of us, the chances of mistakes may be mitigated,” he said.

Museveni however, asked the conference to try to address the Mutebile’s concerns on the fact that cryptocurrencies are not backed by individual countries. “You should answer the Governor’s question on who will be the guarantor of this a supranational currency, since it is not legal tender.”