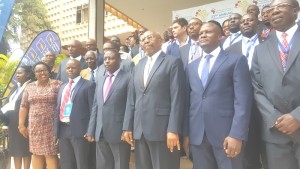 Dr. Rugunda represented the President to officially open the African Union for Housing Finance conference during the week.

October 20—President Yoweri Museveni has asked the housing industry and relevant authorities to tame the spread of unplanned human settlements and develop a better housing environment by working at reducing costs.

“The cost of acquiring a home in our urban centres should be reduced to enable our people to affordably own homes.” He said the high cost of acquiring homes has forced many urban dwellers to resort to slums or remain tenants.

Museveni’s speech was read by the Prime Minister, Dr. Ruhakana Rugunda during the African Union for Housing Finance 33rd Annual Conference which was held in Kampala this week.

He said urban development has been steadily progressing for the last over 20 years at 5% higher than the population increase rate and close to the Gross Domestic Product growth.

“We have registered 5% average urbanization rate since 1991 compared to the annual population growth rate of 3%. The GDP has also been growing at average 6.6% for the above mentioned period,” he said.

He said Kampala city with the current population of about two million is expected to be home of 10 million people in the next 10 years considering the 6 percent population growth rate.