July 6, 2018—Muni Girls Secondary School from Arua in Northern Uganda, have emerged winners in the […]

July 6, 2018—Muni Girls Secondary School from Arua in Northern Uganda, have emerged winners in the third edition of the Stanbic National Schools Championship, following a highly competitive finale held in Kampala on Thursday. 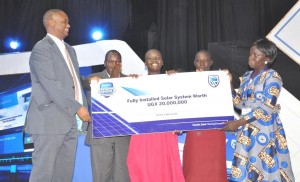 Mweheire hands over a dummy cheque to the duo of Muni Girls as school.

The competition is organised by Stanbic Bank Uganda (SBU) together with the Ministry of Education and Sports. Finalists were expected to think up a business venture, present a relevant business plan and explain the sustainability of their enterprise. Entrants were drawn from schools across the country with the basic intention of getting young people to become self-starters in business.

The 2018 edition was launched on March 19, 2018, with an even bigger number of willing participants compared to previous years.  It is now the centrepiece of SBU’s Corporate Social Investment in the education sector

Commenting on this year’s competition, Stanbic Bank’s Chief Executive, Patrick Mweheire said, “Stanbic Bank believes that investing in education is a critical vehicle to fostering development in the country. This has been a fantastic competition and the entire programme has shown us the budding entrepreneurship potential in the country.”

The winning school will get a fully paid solar system worth UGX 20 million (about $5000), while the participating students are to fly off to Johannesburg, South Africa, for a four-day all expenses education trip. Each will also receive a new IPad. Runners-up will also be rewarded with prizes, ranging from smart phones, modest cash deposits on their accounts, computers and water systems for their  schools.

Mweheire said, “Uganda has over the recent past been hailed as the world’s most entrepreneurial country. However, according to recent studies by the Global Entrepreneurship Monitor (GEM), almost 10% of Ugandans started a business in 2015 yet a fifth of individuals aged 18-64 also discontinued a business in the same year and most business don’t last more than their third year.”

“Young entrepreneurs in particular have generally low growth expectations while few innovate or vary product lines. The National Schools Championships project under this year’s theme, ‘empowering the job creators of tomorrow’ was meant to stretch students to think outside the box beyond just job hunting after school. We can confidently say that after these five months, the students understand the importance of being innovative to create jobs,” he said.

Some 6,000 students from 60 schools took part including both government and private institutions. Competitors had to go through several rounds of activities that comprised of classroom tests, oral quizzes, essay competitions, debates and finally a business skilling sessions centred around financial literacy, life skills, logic, business and entrepreneurship.

“These students have been outstanding throughout the competition. They beat more than 10 schools to win in their region and have carried this form into the finals culminating in their victory. They are truly worthy winners and representative of exactly what we were looking for when we started this competition which necessitated innovative minds, teamwork and commitment,”  Barbara Kasekende, the SBU Corporate Social Responsibility Manager said during the prize giving ceremony.