September 18, 2018—Residents of Rukungiri and Kanungu in western Uganda can now sigh with relief following […] 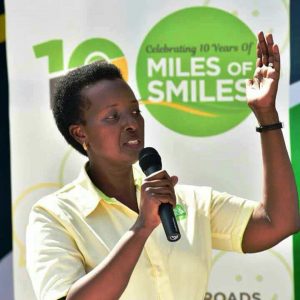 Kagina said investigations into several allegations of corruption in the procurement process and which turned out to be false delayed final selection of contractors.

September 18, 2018—Residents of Rukungiri and Kanungu in western Uganda can now sigh with relief following the signing of contracts to upgrade key roads in the region with total costs at UGX402.8 billion (about $105 million) under the watch of the Uganda National Roads Authority (UNRA).

“These two projects have been the most challenged with several wrong whistle- blowers that forced us to stop the procurement process more than twice. We are very glad that finally the projects went through and ground works will start soon,” Allen Kagina, UNRA executive director said on Monday. Works are expected to begin in 42 days.

Contracts were signed for upgrading the 78.5 kilometre road that traverses the districts of Rukungiri and Kanungu and the 41km Masaka-Bukakata road from their current states to bituminous standard.

The Rukungiri-Kihihi-Ishasha road will contracted to China Henan International Corporation Group Company Limited who won with a UGX 207.8 billion bid beating out 11 other firms. Bids were submitted in July 2018.  The Masaka- Bukakata contract valued at UGX195 billion was awarded to Arab Contactors (Osman Ahmed Osman and Company) after the former front-runner, Copri Construction Enterprises failed to submit a performance bond in time which forced UNRA to cancel the procurement.

Funded through a loan from the African Development Bank (AfDB) under the Road Sector Support Project, the Rukugiri- Kanungu road which is expected to be completed with in 36 months. Construction will be supervised by SMEC Limited and an internal team from UNRA while the Masaka-Bukakata roadworks are being funded through  a loan signed in 2012 between the government and the Arab Bank for Economic Development in Africa and the OPEC Fund for International Development (OFID). The contractor for the Masaka road project is expected to start in 60 days and deliver the project with in 24 months.

The two projects have been riddled with delays due to political and procurement issues where a number of whistle blowers have been coming out with various allegations of corruption. However subsequent investigations have unearthed no irregularities.  Kagina blamed vested interests for the delays.

She however said the government through UNRA has done a thorough due diligence and gone through all the procurement processes to make sure that the chosen contractors are the most deserving and will deliver quality work on time.

Roads junior minister, Katumba Wamala said the government is looking into how to change the Whistleblowers Act that has been misused in several projects to avoid similar problems in future.”Instead of stopping a project midway and causing the government to incur losses, we want to make it in such a way that any whistle-blower issues are investigated while the project goes on. If the issues are found to be substantial, the aggrieved contractors can be compensated later,” Wamala said.

Wamala asked local businesses to take advantage of the opportunities that will open up with these contracts.”Even for those projects we expect 30 pc of the project works to go to locals. However I appeal to Ugandans to work on their work ethic and desist from misusing these job opportunities to steal or cause losses to the contractor,” he said.