Home » U » MultiChoice in new move to nurture African talent 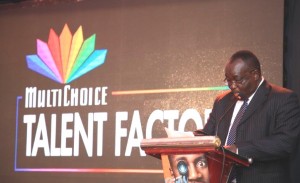 Musoke said not enough investment has been made in nurturing homegrown talent and MultiChoice wants to play a part in turning around this situation.

“The African development story has long been defined by investment in the vast mineral wealth on the continent, leaving our creative industries to fend for themselves on the fringes of economic development for far too long. As a result, the film and television industries have not developed at the same rate as other industries on the continent, and not for a lack of talent, passion or imagination,” Steven Musoke, Chairman MultiChoice Uganda said.

He said, “We are abundantly blessed in these areas, however, the space given for this expression has at best been limited and at worst, been relegated to the fringes of the mainstream economy, leaving in its wake, unfulfilled dreams, unexplored talent and unwritten stories.”

“As an African business, MultiChoice, together with our valued partners and stakeholders across the continent, have collaborated to make a positive socio-economic impact in the communities in which we live and work through the MultiChoice Talent Factory initiative,” Musoke said.

For over two decades, MultiChoice has been committed to investing in the development of original African programming and showcasing it on the DStv and GOtv platforms across49 sub-Saharan African countries.The launch of MTF forms part of the company’s new strategy of furthering this investment through creating shared value by using its core business resources, people, skills and networks to affect a positive change in society that yields benefits for the business and society.

The MTF initiative will deliver three touch points that launch throughout the year, the MTF academies, Masterclasses and the MTF Portal. The first to launch is the MTF Academy, a 12-month educational programme aimed at furnishing 60 deserving, young, talented people who want to work and innovate in film and television production.

The MTF Academy students will be provided with skill-sets to develop their talent, connect with industry professionals and tell authentic African stories through a comprehensive curriculum comprising theoretical knowledge and hands-on experience in cinematography, editing, audio production and storytelling. 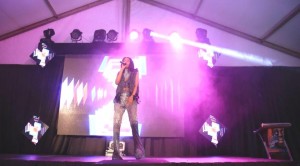 Vinka was one of the artists who got a chance to showcase her talent to the invited guests who included senior government officials.

The programme will take place at three regional MTF Academies based in Kenya for East Africa, Nigeria for West Africa and Zambia for Southern African countries and will be overseen by acclaimed local film and TV industry experts. In East Africa, Njoki Muhoho has been appointed as the Academy Director for the hub.

She said, “Film making knowledge and skills that translate into enhanced livelihood, is what our youth in the creative industry desire. The MultiChoice Talent Factory is the response to this cry. MTF is a 12-month long film making boot camp where the student will be taken on an experiential and practical film-making journey that will result into a highly-competent graduate who is a passionate, employable and an entrepreneurial film maker. My role is to be a catalyst to this process.”

During the course of the programme, MTF Academy students will produce television and film content that will be aired on our local M-Net channels across the MultiChoice platform including Africa Magic, Maisha Magic East, Maisha Magic Bongo, Zambezi Magic, M-Net and SuperSport to reach African audiences on the DStv and GOtv platforms.

Upon graduation from the MultiChoice Talent Factory Academy, the student will leave the place with the knowledge and skills to contribute professionally to the film and television industry.