MultiChoice hosts media at party for their support

December 18, 2017 in Communications, Companies by Editor 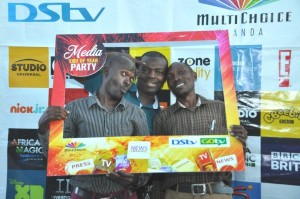 Three guests at the MultiChoice Uganda party switch on smiles of appreciation during the fun and games that marked the event.

December 18—MultiChoice Uganda, the pay-television company, recently held a party for several media people in appreciation of the industry’s support during the year

“The support given to the company by the media cannot be underestimated. We rely a lot on the media to reach our customers and to communicate what is happening within the organization. Simply put, there is no moving forward without media support,” Charles Hamya, the General Manager told is guests.

The party was held at the Pearl of Africa Hotel by the pool side with a beach theme and took in such activities as a quiz, swimming, a barbecue, dancing and a number of other games.

Hamya said, “MultiChoice this year has taken steps towards strongly maintaining its position as a force to be reckoned with as a pay-tv service provider in the country.  To ensure that the company’s services are even more affordable for our customers, in November we reduced all our DStv bouquet prices. The Premium bouquet was reduced by 2.52%, Compact Plus by 5.61 %, Compact by 5.43%, Family by 10.11% and Access by 13.16%.”

He said during the year the company also introduced a variety of new channels across its genres and offered a number of pop-up channels including MNet Movies James Bond, Harry Potter and the Fast & Furious series that were well received by their customers. “W are having an animation festival for both young and old on M-Net Movies Smile called Animania. We also added more spectacular content on to the Family and Access bouquets at no extra cost,” hesaid.

In support of the local productions, MultiChoice added more local content like Channel 44 which was recently added on DStv and Spark TV on both DStv and GOtv. Channel 44 is a Christian content channel that broadcasts both local and international sermons with worldwide Gospel music and Spark TV is purely a feminine channel that focuses on mainly women programmes. 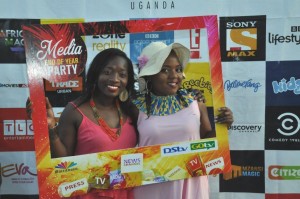 Company spokesperson, Tina Wamala (left) made sure all the guests were happy.

Currently DStv is running the DStv Premier League promotional campaign where winners are walking away with Explora decoders. GOtv ran the Wangula School Fees promotion where GOtv  lucky customers walked away with school fees and scholastic materials. The GOtv KwataKavu campaign was launched mid-year where winners were rewarded with cash.

Hamya highlighted MultiChoice Uganda’s trend-setting, but with an eye on affordability. “GOtv this year introduced a new premium package dubbed “GOtv Max” at UGX 49,000. With this package our GOtv customers get to enjoy a broader choice of entertainment than ever before with four new channels and the hottest local and international programming inclusive of all the La Liga matches on a new sports channel, SS Select 4, selected live games of the Premier League and wide sports offering which includes WWE, rugby 7’s, athletics and football,” he said.

He said locally the company has also managed to support sports in various ways especially through sponsorships for Express FC, DStv Kampala Kids Run and the DStv Uganda Swimming Federation. He promised more such initiatives in 2018.

Hamya said, “I take this opportunity to thank our subscribers for the incredible support they have given us this year and look forward to an even better 2018. We will continue to introduce more new innovative technology that will enhance our customers’ overall viewing experience in the New Year. Most importantly I thank the media for honoring our invitations and for the continuous support you have shown the company throughout 2017. Let’s keep strengthening our working relationship even more. Happy holidays!”