July 26, 2018–A major reason behind Prime Minister Narendra Modi’s visit to Uganda and Rwanda this week, […]

July 26, 2018–A major reason behind Prime Minister Narendra Modi’s visit to Uganda and Rwanda this week, is to remind Africa, China is not the only game in town. 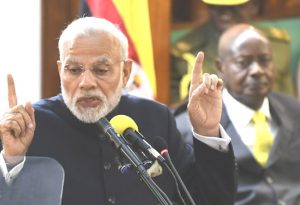 With Museveni (right) looking on, Modi said India will help Uganda in several areas including energy, agriculture and health.

He was careful not to mention China by name, being that he would soon be face to face with President Xi Jinping at the BRICS Summit in South Africa, but the message was clear. Indians still have something to offer towards African economic growth and have been doing so albeit in a less spectacular manner than their Asian neighbour.

A fortnight ago, the International Monetary Fund said during 2017, India became the sixth biggest economy in the world with a GDP of $2.597 trillion after slipping past France at $2.582 trillion.

Speaking to a special sitting of the Uganda parliament on Wednesday Modi said, “I announced yesterday two Lines of Credit for Uganda. The first, of  $141 million for electricity lines and the second, of $64 million for agriculture and dairy production. Our partnership currently includes implementation of 180 Lines of Credit worth about $11 billion in over 40 African countries. At the last Africa India Forum Summit, we had committed a concessional Line of Credit of $10 billion and $600 million in grant assistance.”

Impressive as this is, it does not change the fact that Chinese annual trade with sub-Saharan Africa now hovers at $200 billion, more than double the volume with India and Chinese state-owned companies dominate the continent’s major infrastructure contracts.

However, the one thing India can exploit, is that feeling among an increasing number of Africans  of being bulldozed by Chinese’s interests despite talk of ‘mutual benefits’ and the’ win-win principle’.

In Kampala, entry of hundreds of Chinese in local retail business continues to cause some unease especially since they often undercut them price-wise because of having the financial clout to import in bulk. On the other hand Ugandan trade with India, like that with China, is skewed and Ugandans still buy more goods (particularly pharmaceuticals) from the Asian giants than vice versa.

Modi told Ugandan legislators and diplomats,”We will keep our markets open and make it easier and more attractive to trade with India. We will support our industry to invest in Africa,” he said.

Last year, during the annual African Development Bank meeting hosted by India, Modi said, “India’s partnership with Africa is based on a model of cooperation which is responsive to the needs of African countries. It is demand-driven and free of conditions.”

One area where the Uganda government can ask for immediate help is developing small scale industries. India has a thriving SSI sector that contributes over 40% the gross turnover in the manufacturing sector, about 45% of manufacturing exports, and 35% of the total exports. Uganda’s own small scale industrial sector remains largely undeveloped and in need of urgent technical assistance to forge greater linkages with other sectors of the economy if the push for value-added is going to yield any positive results.

Under the auspices of the International Trade Centre, the Supporting Indian Trade and Investment for Africa (SITA) project is helping several African countries, including Uganda, to improve skills. For instance, in February, representatives from leather tanneries, across East Africa were invited to the India International Leather Fair (IILF), a key leather industry trade event. Since 2016, East Africans have been increasing leather exports to India but at just over $1 million to date, the quantities remain modest.

Modi promised that India would improve accessibility of Ugandan products on competitive terms and also help in boosting tourism between two countries. He also offered support in building capacity for export oriented industries.

“We will harness India’s experience with the digital revolution to support Africa’s development; Africa has 60% pcof the world’s arable land, but produces just 10 pc of the global output. We will work with you to improve Africa’s agriculture,” Modi said.

President Yoweri Museveni announced that he had requested Modi to allow Uganda Airlines, (once it is back in the air), to have a  direct flight between Entebbe and Mumbai to which Modi tentatively agreed.

“This will ease movement of goods and people between the two countries as we strive to strengthen trade and tourism between Uganda and India,” Museveni said.