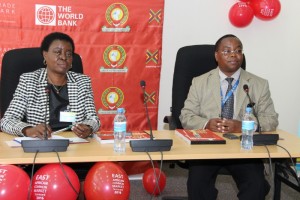 Lubega-Kyazze and Mariki at the Arusha workshop where the latest results on the barriers to a Common Market were revealed.

April 25– The latest East African Common Market Scorecard (CMS 2016) says some nice things about regional government efforts to ease cross-border trade, but then points out that there are still barriers in the free movement of capital, goods and services.

Successful implementation of the EAC Common Market Protocol (CMP) depends on member states removing all tariffs and doing away with non-tariff barriers (NTBs) that impede trade across their common borders. The aim is to make the EAC a single market. NTBs can be in the form of levies, quotas, embargoes and sanctions.

Despite progress in some areas, the World Bank funded CMS spotlights concerns over recent measures that have been implemented to hinder regional trade and investment.

For example, in the area of finance, under the CMP, Partner States committed themselves to liberalize 20 capital market operations. However, at the end of December 2015, the reference period for CMS 2016, only two of these 20 operations were free in all Partner States showing no improvement since 2014. However, 11 reforms have been undertaken since the publication of CMS 2014, all in the securities area.

The findings were revealed during a recent dissemination workshop on EAC Common Scorecard 2016 that was held at the EAC Headquarters in Arusha, Tanzania. The World Bank team was led by Jean Lubega-Kyazze, Senior Private Sector Specialist, while Wilberforce Mariki, the Director of Planning  represented the EAC Secretary General.

The report reads in part, ‘In the CMS 2016 results, Kenya has met the threshold of no restrictions on the 14 operations measures relating to securities. Uganda also enacted reforms affecting two of the operations but continues to have residency restrictions on the local purchase of shares or other securities and of bonds and other debt instruments by charging non-residents withholding tax rate of 15% on dividends from listed companies while residents are charged 10%’.

The report points out on personal capital operations, all EAC Partner States – except Tanzania – require that all amounts above $10,000 should be declared on exit or entry. However, Partner States do not restrict the operation.

‘Tanzania places a $10,000 limit for residents traveling abroad with foreign currency, including to EAC Partner States. Tanzania also provides that funds due from assurance policies taken outside Tanzania may only be transferred into or from Tanzania is servicing such policies is done using externally generated funds’, the report states.

Only two  out of the 20 capital operations are free in all Partner States, namely external borrowing by residents and repatriation of proceeds from sale of assets. All other 18 operations have at least one Partner State restricting the operation.

The Scorecard, among other things, recommends that to release regional capital for private sector growth, the EAC should prioritize the rollback of laws, regulations and investment codes that impede investment.

On the Free Movement of Services, the CMS 2016 notes that although Partner States have committed to liberalization in a number of service sectors, they followed a positive list approach, scheduling only those sub-sectors they were willing to open up.

‘Non-conforming Measures (NCMs) have increased in the telecommunications sector – largely because telecommunications commitments did not take effect until 2015, so all countries were rated as having zero NCMs. The vast majority – about two thirds – of NCMs are in professional services’, the report states.

It suggests that in order for EAC to achieve the accelerated economic growth and development envisaged in the CMP, an efficient services sector is key, given its centrality to the proper functioning of every other sector.

CMS 2016 recommends the amendment of the relevant provisions on trade in services under the CMP, noting that this will not only deepen integration in services in the EAC, but also greatly boost and attract investment within and into the EAC region.

On the Free Movement of Goods, the report points out that as was the case in 2014, all Partner States have eliminated tariffs on goods originating from within the EAC. All Partner States therefore score full marks in CMS 2016 for compliance with the Rules of Origin (RoO) following the revised RoO.

The report observes that Partner States continue to apply charges on each other’s goods that are equivalent to the tariffs that were removed to facilitate free movement of goods.

‘These charges include charges levied on imports by various government agencies and local authorities or county governments, road user charges, charges associated with all cases of non-recognition of Certificates of Origin. In total, there were 35 such charges, 28 new charges which were imposed in the CMS 2016 review period and seven (7) charges carried from the CMS 2014’.

The report, among other things, calls for the: elimination of tariffs and charges with equivalent effect; elimination of NTBs, and; harmonization and mutual recognition of Sanitary and Phyto-sanitary Standards (SPS) and Technical Barriers to Trade (TBT).