December 12, 2018— Affordability together with the limited capacity in the efficient transmission and distribution of […]

December 12, 2018— Affordability together with the limited capacity in the efficient transmission and distribution of electricity in Uganda is creating a mismatch seen by the slow uptake in consumption despite excess supplies. Uganda is due to double its power production to nearly 2000MW in two years. 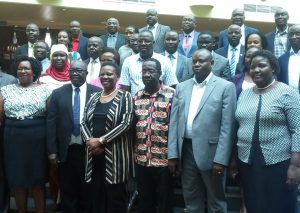 Eng. Muloni (third left) told members of the consultative meeting that currently Uganda is producing 950MW of power against a total consumption of just 650MW.

“It is alarming for people to hear that we have more power than what we can consume and yet power shortage in some parts of the country is a big problem. We need to invest more in lines that will transmits this power to domestic and industrial users,” Eng. Irene Muloni, the energy and mineral development minister said recently.

She told a consultative meeting of Parliament’s Natural Resources Committee of Parliament Uganda currently produces about 950MW against a total demand of 650MW. She cited electricity reliability, accessibility and affordability as the main reasons for this mismatch. The government has begun to offer subsidised connections to according to a set critieria intended to expand use of electricity in rural areas.

Eng. Muloni said the situation can be improved if more money is invested in transmission and distribution infrastructure, including purchase of new transformers.

The meeting was organised by the Electricity Regulatory Authority (ERA) under the theme ‘Accelerating Access to affordable and Reliable Electricity Supply’. It gave an opportunity for key players in energy sector, like Umeme Limited, the main electricity distributor and Uganda Manufacturers Association, a leading user to present their views.

According to the Minister to date, 78 pc of Ugandans are still without grid electricity which is a setback for attaining middle income status by 2040 and over 90 pc connectivity.

“Power connectivity and reliability is important for economic development, manufacturing, women empowerment, education, medical access and others that are essential for the well being of our people. But currently power is a bit expensive,” she said. Uganda charges some of the highest electricity rates in the region.

She said, “Currently we are trying to implement the President’s directive of five US cents for the industrial sector, but this is still hard especially during peak hours. However we are working towards that so that power is the driver for economic production.”

ERA executive director, Eng. Ziria Tibalwa Waako said despite the current challenges, the sector was growing and performing better now compared to previous years and would even do much better once ongoing construction of new power plants are completed and commissioned. The Karuma Dam will add 600MW to the national grid while Isimba Dam will provide an additional 180MW.

She however appealed to Ugandans to look at energy as a commercial commodity that required sustained investment in instead of referring to it as an essential good that should come cheap.

“Power in Uganda is generated by private companies that have invested in their money and expect returns by selling electricity. Although the regulator must ensure that the tariffs are affordable, it shouldn’t be expected to be cheap,” she said.

South Africa’s Eskom is Uganda’s top generator today under a deal overseen by the UEGL, but there are several mini producers entering the market  while Umeme Limited is the leading distributor.