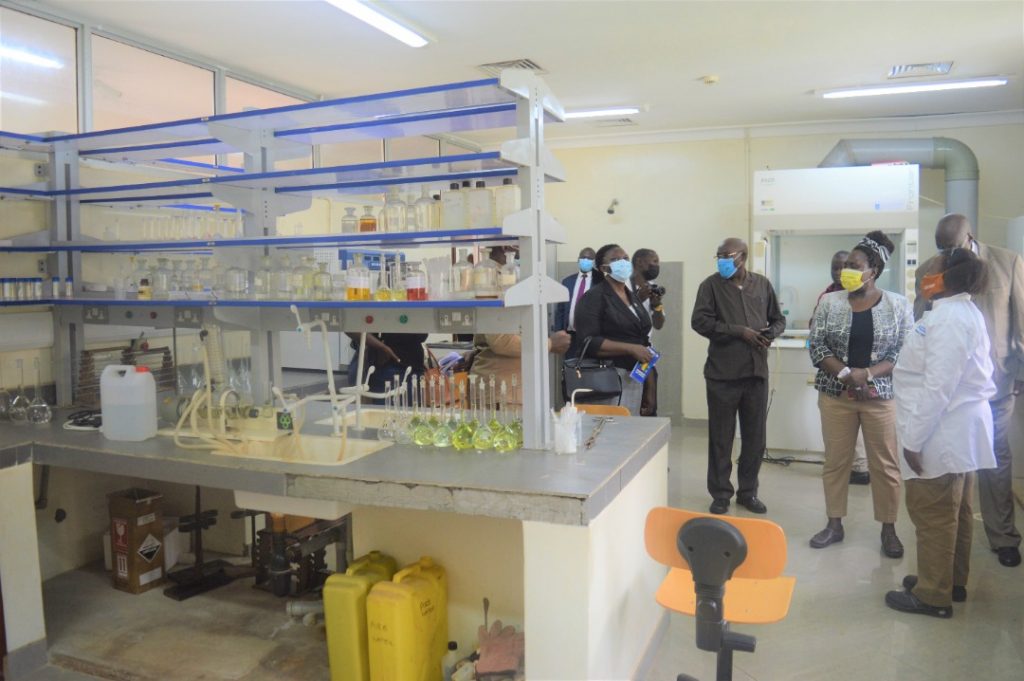 Flanked Permanent Secretary Irene Batebe and her junior ministers, Energy Minister Ruth Nankabirwa tours the advanced minerals laboratory at the Directorate of Geological Surveys and Mines at Entebbe on January10

The Ministry of Energy and Mineral Development, has dedicated the third quarter of fiscal 2021/22 to […]

The Ministry of Energy and Mineral Development, has dedicated the third quarter of fiscal 2021/22 to addressing challenges in the mining sub-sector, as it moves to unlock the potential of a sector that at its peak accounted for 30pc of Uganda’s GDP.

Speaking during a tour of the Directorate of Geological Surveys and Mines  in Entebbe this week, Ruth Nankabirwa, the minister for energy said the ministry was aware of the challenges and potential of the subsector and was committed to raising its profile. The minister who committed herself to spend her Fridays at the directorate, said besides raising the profile of the subsector, dedicating the current quarter to the sector, would help have its priorities mainstreamed into the ongoing budgeting cycle.

Irene Batebe the Permanent Secretary at the ministry said Q3 had been declared the mining subsector quarter in order “to shine the spotlight on it and to ensure it is getting the much-deserved attention.”

The subsector is seen as a key driver towards achieving the objectives of Uganda’s Vision 2040 and the third edition of the National Development Plan which seek to elevate Uganda to Middle Income Status by 2040. Reforming the sector is seen as essential to reducing the value and volume of imported iron and steel and organic fertilisers while increasing the volume and value of processed iron, gold and copper.

“This subsector is critical and deserves attention. Most of the regulatory challenges have been in the draft mining bill currently and we are optimistic that it will soon be passed by the house,” Ms Nankabirwa said.

Responding to some of the issues raised by directory staff, Ms Batebe, the PS, said the key strategy for lifting the subsector’s profile should be the adoption of a commercial approach to complement mineral exploration and better visibility for its activities.

Batebe added that while it was recognized that the directory needs affirmative action in terms of funding but the work ethic also needs to change in terms of improved staff performance and turnaround times.

“We need to see some expediency in work so that it does not take days or weeks to get responses and actions by staff here. You also need to think innovation to tap into opportunities and projects that can attract external funding,” she said.

According to officials at the directorate, the contribution of the mining sub-sector had slipped into negative during the years of political turmoil. Although it has registered some recovery, its contribution to GDP is still below 5pc because of a plethora of problems including an inadequate legal framework, underfunding, dormant assets and understaffing. The high geological risk has also limited private sector appetite for the upstream of the sector, Vincent Kedi, the Commissioner for Licensing and Administration said.

Kedi revealed that at its peak in 1972, the mining subsector accounted for 30pc of Uganda’s GDP. Its contribution, mainly through non-tax revenue averaged UGX 16-20 billion between 2016 and 2019. Combined with the value of exports of transit gold refined in Uganda, the sector’s contribution was close to 19pc in 2019, Kedi said.

Giving an update on plans to revive the Kilembe Copper Mines, Nankabirwa revealed that bidding documents for the retendering of were complete and bidding would soon open. Legal disputes surrounding ownership of the mines had also been resolved, eliminating a major obstacle to progress.

“We seem to have reached agreement with the custodians of the Toro Kingdom, which once had shares in the mines and their interests have been taken care of. The bid documents are ready and we will soon be inviting international bidders to make offers,” she said.

Money for remedial works to repair the damage to the mines by seasonal flooding of River Nyamwamba has been released and NEC Construction was on site to execute the works the minister revealed.