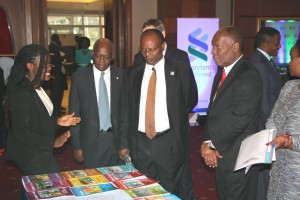 Albert Saltson (right), the StanChart Uganda managing director shows Dr, Kasekende around after the launch of the report.

March 22, 2018—Finance minister, Matia Kasaija, plans to invite top bankers in the country to brainstorm over the relatively high interest rates. He wondered why Uganda’s rates continue to stay relatively high despite the steady fall of the Central Bank Rate now at 9%.

He said he wanted a solution that would allow Ugandans access affordable credit from the commercial banks, but he also advised banks to always follow up to reduce defaulting and bad loans.

“Ugandans have a bad culture of not paying back loans so its upon banks to follow up and make sure that money lent out is not misused or diverted. Do not wait until its time to pay back and start looking for the customers. Go out there and supervise them from the beginning and make sure the money borrowed is being used for the right purpose,” Kasaija said during the launch of the Standard Chartered Socio-Economic Impact report in mid-week in Kampala.

Meanwhile Dr. Louis Kasekende, the Deputy Governor Bank of Uganda (BoU) has suggested banks make more use of latest digital technology to help increase lending to small and medium enterprises (SMEs) and at the same time reduce their costs in processing loan applications.

“The few banks that have risked lending to SMEs have to lend at a high interest rate, because of the heavy costs involved in processing, monitoring and recovering the loans,” he said at the same event.

He said, “Small businesses need immediate small money. They can be accessed fast and paid fast. This is possible if banks use information technology like mobile banking. This will reduce the cost of processing the loans hence the interest rates will also go down.”

Kasekende said the main reason banks continue to lend at high interest rates of more than 20% is because the majority of businesses in Uganda are informal and on a small scale which makes them too risky and not credit worthy.

He said due to this fact, credit access in Uganda has been limited to a few people who are in formal businesses leaving the majority of business people unable to access credit to help them improve their businesses. This is also limiting banks because they do not have a large scope of borrowers.

The StanChart report is an independent study which highlights the bank’s socio-economic contribution across East Africa and Uganda.