August 16—Patrick Mweheire, the Chief Executive of Stanbic Bank Uganda (SBU), has said the bank has […]

August 16—Patrick Mweheire, the Chief Executive of Stanbic Bank Uganda (SBU), has said the bank has kept its promise of carefully tracking the Central Bank Rate (CBR) and lowering the prime rate in line with the CBR. 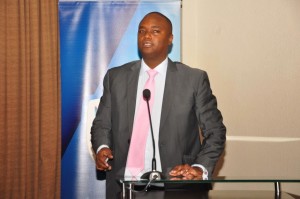 Mweheire said at 18%, the SBU prime rate is the second lowest of all commercial banks.

He admitted this is at the expense of reduced earnings, but Mweheire added even the available credit is not being fully utilized.

Currently SBU is offering the second lowest prime rate at 18% while the CBR is at 10% and the average for all commercial banks is 22%.  This is after the Bank of Uganda (BoU) decided to leave it unchanged after the latest meeting by the Monetary Policy Committee last week.

The CBR has dropped 500 percentage points from the 15% seen in June 2016. SBU has the highest movement in the prime rate of 600 bps between June last year and August 2017.

‘We have done what we would do and that is we have come down with the CBR and moved more than any other bank. The lending growth in the industry is at 5.7%, but SBU is currently at 7%,” Mweheire said when presenting first half figures for 2017 in which SBU saw profit after tax drop slightly from $30 million to $27 million. Full year figures for 2016 saw SBU make a profit-after-tax of $53 million up from $44 million in 2015.

In spite of the BoU to ease down on the CBR since December 2016, Mweheire said several key sectors like manufacturing, real estate and construction, were still subdued showing little appetite for borrowing.

He said industry client loans and advances growth has remained under 1%.  While total SBU client loans have grown by 8% year-on-year (YoY), profitability is down 11% YoY.

Net interest income for the first half of 2017 slipped by a million dollars to $50 million compared to the $51 million earned during the same period in 2016. However operating costs were cut from $49 million to $48 million spent the previous year. Mweheire said the cost of service is going down and the bank will continue to make savings by pushing digital platforms income ratio is now under 50%.

Mweheire said, “We have revised our risk appetite and should be able to disrupt the market in H2‟17 in a drive to increase asset uptake having dropped our prime lending rate to 18% and positioned to drop it further should the need arise. The impact on our income lines has already been determined and factored into our FY 2017 forecast.”