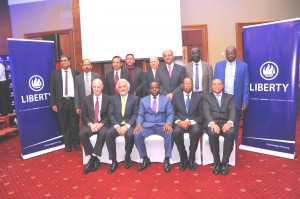 The top management of Liberty General Insurance Uganda Limited take a photo opportunity together with representatives of their majority shareholders, Liberty Holdings Limited.

“We are excited to announce that we are changing our company name to Liberty General Insurance Uganda Limited,” Peter Makhanu, Managing Director said.

South Africa’s Liberty Holdings Limited (Liberty) acquired a 51% stake in January 2016. He said, “Since the acquisition, we’ve worked diligently to bring the best of both companies together, for the benefit of all our stakeholders. Our new name and brand represents our purpose to make a difference in people’s lives by enabling their financial freedom.”

Liberty describes itself as a pan-African financial services group with a presence in 24 countries that offers an extensive market leading range of products and services to help customers build and protect their wealth and lifestyle. These include; life, general insurance and health related insurance and investments.

Makhanu said, “Together with our sister company Liberty Life Assurance, Uganda’s leading life insurer, we will be focusing our strategies at growing market penetration by responding  to the needs of the Ugandan consumers and launching innovative, simple, relevant and accessible offerings in both the life and general insurance markets.”

Insurance penetration remains low in Uganda at less than 1%. One company official said renewed efforts will focus on educating the consumers about the benefits of having the correct insurance cover.

Recent events around the world also serve as evidence that countries and individuals remain inadequately insured due to lack of awareness. But the industry expects growth of between 6% and 8% particularly due to changes brought about in financial year 2017/2018 as related to Motor Third Party Insurance, Marine Insurance and Agriculture Insurance.