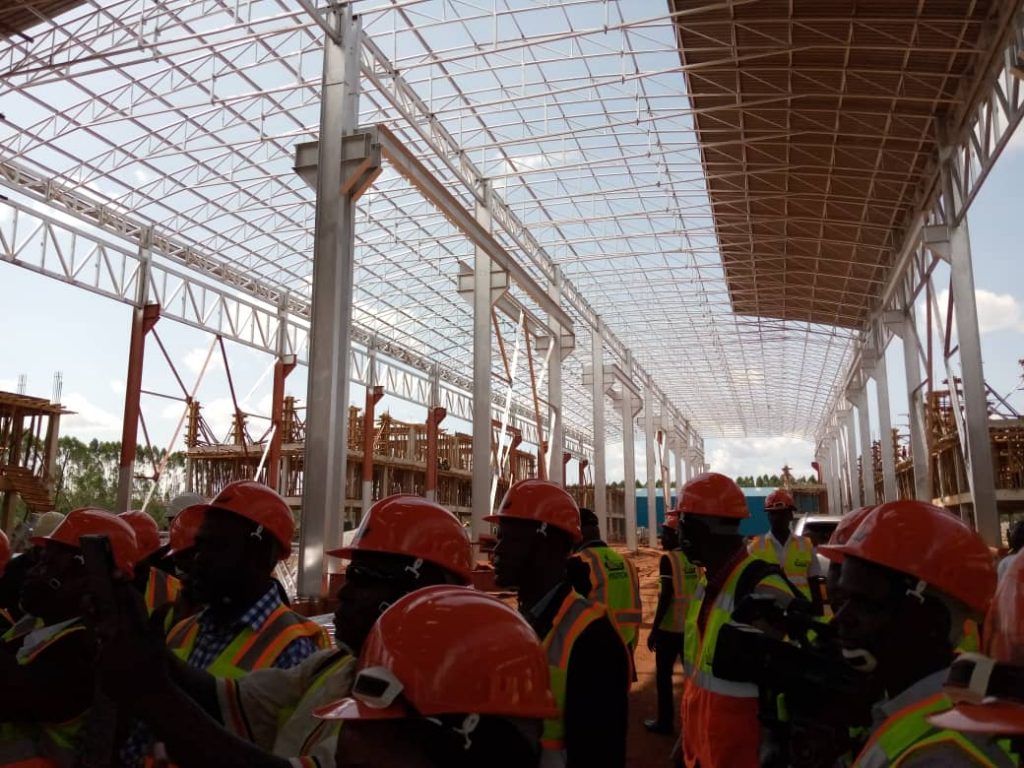 Hon. Rebecca Alitwala Kadaga, the Speaker of the Ugandan parliament has pledged support for Kiira Motors […]

Hon. Rebecca Alitwala Kadaga, the Speaker of the Ugandan parliament has pledged support for Kiira Motors automotive manufacturing project, following a maiden tour of the company’s final assembly facility that is under construction in Jinja on March 13.
The Speaker who also took a 20km courtesy ride to the site, from the Jinja bridge in the Kayoola EVS, the electric bus that was assembled by Kiira Motors technicians at Nakasongola said the project held immense potential for Uganda and  was worthy unreserved support.
“I sometimes get bothered that we are not investing in the things than can bring money to this country. Kiira Motors is a good example of import substitution which can also resolve issues such as job creation and revenue leakages.
“You have my support and you are going to hear from me,” Kadaga told an audience of local leaders, legislators, as well as staff from the ministry of Science and Technology and Kiira Motors Corporation.
Kadaga’s pledge comes amidst growing concern over the widening funding gap for Kiira Motors that has now reached a cumulative UGX70 billion. Construction of the 40,000 square-metre facility started in February 2019 with June 2021 projected as the date when the first locally assembled buses would roll off the assembly line.
Briefing Kadaga on the project however, Hon Fred Kyakulaga Bwino, the Chair of the House Science, Technology and Industry Committee and Hon. Professor Tikodri Togboa, the Executive Chairman of Kiira Motors Corporation, pointed to funding hurdles that are impacting  implementation.
“The major bottleneck impacting the implementation of the roadmap approved by government is the growing funding gap. This cash-flow constraint pauses a serious challenge to the completion of the project by June 2021. It is our humble prayer Rt. Hon. Speaker, that Parliament through your leadership appropriates the required UGX 69.5 Bn in FY 2020/21 to secure the timely completion of the Kiira Vehicle Plant,” Bwino said.

He explained that while UGX 143.7 billion had been approved for phase one construction and operationalisation of the Kiira vehicle plant, covering the period between fiscal 2018/19 and 2021/22, only UGX 41.5 Bn had so far been released to the current financial year. Another UGX 20Bn provided for FY2020/21 against a  requirement of UGX 44Bn. Combined with the shortfall in allocations during the next financial year, the funding gap to June 2021 is projected at UGX69.5Bn. Additionally, the project needs UGX 5.2 Bn to acquire land for the Comprehensive Automotive Industrial and Technology Park.

“Rt. Hon. Speaker, we have observed today that tremendous progress has been made by Kiira Motors Corporation towards the construction of the vehicle plant facilities as well as technology transfer with their partners in China. It is my strong belief that if the required funds are availed, the Kiira Vehicle Plant would be commissioned by December 2020,” Bwino added.

Prof. Tikodri said construction works on the plant start-up facilities were at 40 percent but there was a risk that work would grind to a halt unless programmed resources were made available on schedule. Immediate causalities would be the purchase of startup plant machinery, equipment and tooling; technology transfer, and startup operational capital, he explained.

“The strategic government investment in the Kiira Vehicle Plant is expected to create over 14,000 Jobs directly and indirectly; catalyse upstream investment in the manufacture of auto-parts from bamboo, steel and banana fibre among others,” Tikodri said adding that so far, UGX 28 billion had been ploughed back into the Ugandan economy through purchase of locally available materials and services for the plant’s construction.
KMC Chief Executive Paul Isaac Musasizi, explained that save for administrative expenses, whatever little money that has been allocated to construction of the plant had been front-loaded and handed over to prime contractor NEC Construction, a subsidiary of the National Enterprise Corporation.
“If those resources run out, then construction works will be interrupted unless more money is made available,” he told Kadaga.
Musasizi also emphasised early synergies such as local assembly of buses destined for the Kampala Rapid Transit System, if resources were made available.
“We see Tondeka Metro as strategic partners. Local assembly of their buses would save the country a lot of foreign exchange besides delivering the buses at a lower cost since the components can be imported at a lower tax rate than complete units,” he said.
Expounding on the opportunities for automotive manufacture in Uganda, Dr. Ellioda Tumwesigye, the minister for Science, Technology and Innovation, said the growing population in Uganda and the region, coupled with a continent that was breaking down trade barriers, make a compelling case for investment in Kiira Motors.