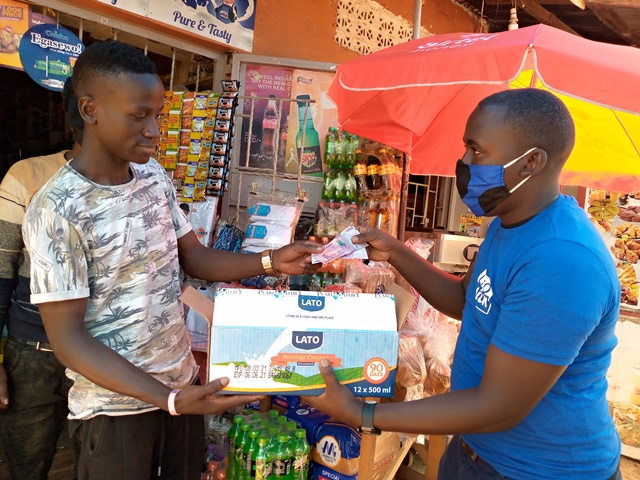 A Lato Milk representative sells a pack of the new Beverage Creamer to a shop keeper in Mbuya Kampala.jpg

Milk processor Pearl Dairy has introduced a new product to the market as  the company moves further to implement a growth strategy anchored on diversification. The company today launched Lato Creamer, a sweetened milk product that is fortified with Soy, is packed in a 500ml pouch and has a 90-day shelf life.

At a price of UGX 1000 a pack, it is expected to rapidly gain traction with a particular appeal to price sensitive consumers. Bijoy Varghese, the General Manager at Pearl Dairy, says Ugandans are a majority milk tea drinking community and with a combination of milk and sugar, two of the three ingredients in milk tea, the creamer will come in handy for most consumers.

“Our customers will not go through the hassle of mixing ingredients and they are essentially getting two products for a price of one,” Bijoy said during the launch. “Not only is the Lato Milk creamer affordable, it is also a nutritious ready to consume product that we are proud to introduce to the Ugandan market. I am proud to say that Pearl Dairy is contributing to the fight against malnutrition in Uganda by producing affordable dairy products that are convenient to the consumer. In addition, the new products mean additional jobs for Ugandans along the supply chain,” he added.

Bijoy says the development of new fresh products forms part of the company’s continuous efforts to be innovative as it looks to spread its footprint across other markets in Africa. Last year, the company announced that it had expanded its export market to Ethiopia, South Sudan and Malawi.