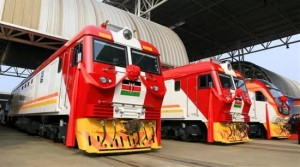 June 1—Ugandan feelings towards the newly opened $3.2 billion standard gauge railway (SGR) line between Nairobi and Mombasa, will depend on how much savings in terms of both time and money they can make ferrying cargo to Kampala. The SGR station in Nairobi is at Syokimau not far from the Jomo Kenyatta International Airport.

On Tuesday, President Uhuru Kenyatta officially launched the freight service on the Chinese-built railway and the following day did the same for the passenger version by climbing aboard for the trip back to Nairobi. He said the drop in cost of freight and fares will make Kenya a more attractive investment destination. The lowest fare is set at about $9, a third cheaper than a bus ticket.

However, Hussein Kiddedde, the Chairman of Uganda Freight Forwarders Association told 256BN, “The real issue for Ugandans is how do you connect from Embakasi to Malaba then Kampala? As much as time and money will be saved during the transit from Mombasa to Nairobi, unloading goods onto the trucks then transporting the same goods down to Kampala will take more time hence overshadowing the possible savings from using the SGR.”

About 90% of Ugandan goods are currently moved by truck from Mombasa. Some trucking firms charge nearly $1000 between the coast and Nairobi. Kenya Railways is now offering 40% savings. It will cost $500 to move a container from Mombasa to Nairobi’s Inland Container Port which is also in the vicinity of the Syokimau station. Last year, Meshack Kipturgo, a director of the East African Shippers Council, advised trucking firms to relocate to Nairobi and distribute cargo from there.

“The situation would better if there was better coordination so that once goods reach Nairobi, they can easily be transferred to the trailers hence benefiting the trader in time and money saved. Our decision to use the SGR will depend on the last mile costs,” Kiddedde said.

Kiddedde said although the SGR is a good innovation for the East African trading community, it will only make real economic sense if was was connecting to final destinations for the cargo. Reports that the Kenya government will terminate the line at Kisumu rather than Malaba, has alarmed Ugandans and jeopardized chances for getting funding for the Malaba-Kampala leg. The Mombasa-Nairobi section took nearly four years to complete.