November 23—A large informal sector that generally frowns on formal systems like social security, is affecting […] 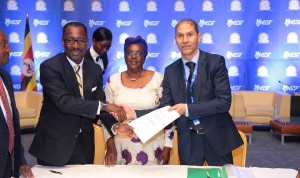 Byarugaba, Okurut and  Majid Fathallah, mark the signing of a Memorandum of Understanding recognising ECASSA as a focal point for the International Social Security Association in East Africa.

November 23—A large informal sector that generally frowns on formal systems like social security, is affecting the speed of coverage across Uganda even as the country plays host to the East and Central Africa Social Security Association (ECASSA) Policy Makers Conference.

The talks in Kampala, primarily hosted by the National Social Security Fund (NSSF), are intended to devise ways of improving coverage in the region.

“Most of the member states have introduced some form of social protection or have social security as a strategic priority but low coverage remains a major challenge. This is exacerbated by the informal sector which forms a large segment of the labour force remain outside the reach of social security and is not covered by any other forms of social protection,” NSSF managing director, Richard Byarugaba said.

Recently, NSSF was awarded the 2017 International Social Security Association (ISSA) Good Practice Award and Financial Literacy initiative.  Founded in 1927, the ISSA has more than 330 member organizations in 158 countries and represented at the Kampala talks by Majid Fathallah.

The conference which ends today, was opened by Mary Karooro Okurut, the Minister General Duties in Office of the Prime Minister and attracted over 70 representatives of social security funds within the East and Central Africa region. Byarugaba assumed the Chair of the regional body for the next one year. He said the region is faced with a myriad of challenges which require concerted effort from respective governments.

According to the International Labour Organisation, in sub-Saharan Africa, coverage by statutory social security schemes is very limited and largely confined to workers in the formal economy and their families.  This situation reflects the fact that only a small minority of workers are in the formal economy, while most workers in the informal economy are not covered. Another important point is that most people in sub-Saharan Africa are employed in agriculture.

The ECASSA Policy Makers Conference is held annually on a rotational basis. It is intended to provide a platform for its members and policy-makers to address social security challenges and seek better ways to promote its development. The conference is being held under the theme ‘Transforming Social Security: From Theory to Practice’.

Byarugaba said the association will, going forward, also work towards harmonising policies for the benefit of the entire region, for instance, the issue of benefits portability across national borders.

Okurut said, “In today’s world, the success of social security institutions is not measured only by the money it generates, the investments it undertakes or the employment it provides; rather it is also assessed by the efficiency and effectiveness with which it delivers services to its constituents,” she said.

She said the Uganda government will provide all the necessary support to the body, and committed to take the lessons from the regional peers whose social security systems are at a more advanced stage.

“We are in the process of reforming the sector in Uganda through discussions with various actors. We are therefore keen to learn from the region so that we can make the correct reforms, but also avoid mistakes that have been made in the past,” she said.

ECASSA was formed in response to the need for social protection/security schemes in East and Central Africa. It’s mission is to foster cooperation and promote the management and development of social security for optimum stakeholder benefits.

As part of the development of social security in the region, ECASSA continuously organizes trainings to further equip members with best practices and also help them deliver on their mandates. “We have set up an International Training Institute that will be officially launched next year in Arusha, Tanzania to equip members with necessary skills,” Dr. Fredric Ntimarubusa, the ECASSA Secretary General said.