Lady nabbed with $9000 worth of ivory

January 31—Uganda Revenue Authority (URA) is holding a woman for trying to sell three ivory tusks worth an estimated $9000 against a backdrop of sharply falling prices following the banning of ivory sales in China starting this year. 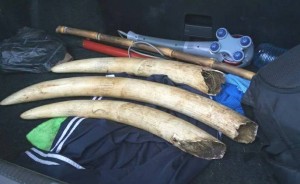 A URA officer posed as a buyer in order to get Akech to close the deal.

Vera Akech, who has been working as a childcarer at a school in Kitgum, northern Uganda, ran out of luck last week after falling into a trap set by URA enforcement  teams. This took place at Corner Kamdini /Karuma Check Point after a tip-off that she was trying to sell the ivory to a dealer under the names of Jefferson Olindi.

“It was agreed that one team member would arrest the suspects while another went undercover taking on the persona of ‘Jefferson Olindi’, an ivory dealer. Before Akech was arrested, the ‘tools of trade’-vehicles, including plain clothed security personnel and Olindi-the buyer, were assembled,” Vincent Seruma, the URA spokesperson said.

He said the team traveled in a vehicle without URA logos, to Kitgum where the seller waited for them. Olindi had traveled earlier to meet Akech. But a rather suspicious, Akech then took Olindi on an impromptu and roundabout tour of Kitgum district to feel him out while URA officers followed in another vehicle at a distance.

Later, following  repeated assurances by Olindi, they halted at a secluded spot where the transaction took place. Olindi was taken to a thicket where he dutifully showed happiness at seeing the ‘goods’ .

He then made a part payment to Akech, but no sooner had she began counting the money, they were surrounded URA officers. Realising that she was in trouble, Akech then took to her heels, but didn’t get very far.

A search of  the thicket ,revealed three pieces of ivory weighing about nine kilogrammes were recovered.  According to Akech’ statement, she got the contraband from criminals said to be based in Kidepo National Park in North Eastern Uganda.

“A file regarding the matter was sanctioned awaiting court allocation. Akech will face charges of possession of prohibited items under the East African Community Customs Management Act,” Seruma said.

The incident was the second in a month. Earlier, the same URA teams impounded two tusks.
URA has also thwarted the sale, importation and exportation of ivory at the borders including Entebbe International Airport.