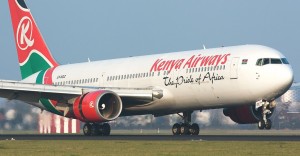 KQ Group managing director and CEO, Sebastian Mikosz, said the new route will fit in with a strategy to attract corporate and high-end tourism.

January 11—Kenya Airways (KQ) hopes to put the worse behind it after reporting record losses in 2015, as it launches ticket sales for its inaugural flight to New York City scheduled for October 28 later this year.

Sebastian Mikosz, the KQ Group Managing Director and CEO said, “This is an exciting moment for us. It fits within our strategy to attract corporate and high-end tourism traffic from the world to Kenya and Africa. We are honoured to contribute to the economic growth of Kenya and East Africa.”

After making a loss of nearly $300 million in 2015, the airline is currently restructuring and permission to fly to America is seen by KQ as big feather in its cap.

KQ plans to use Boeing 787 Dreamliners on the new route with a capacity of 234 passengers. The daily flight will depart from Jomo Kenyatta International Airport in Nairobi at 23:25 arriving at JFK airport in New York at 06:25 the following day. From New-York it will depart at 12:25 landing at JKIA at 10:55 the following day. The east bound journey will take 15 hours while the flight to JKIA will take 14 hours.

KQ will become the first airline to offer non-stop flights between East Africa and the United States. The only other airline in the region that flies to the US is Ethiopian.

The airline already serves Africa, Europe, Middle-East, Indian sub-continent and Asia. The opening of the US destination completes an essential piece for Kenya Airways’ network, cementing its position as one of the leading African carriers.