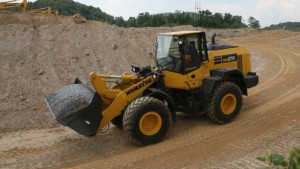 The Ministry has already placed an order for 401 units of construction equipment including wheel loaders (above) and graders.

The deal between Uganda’s works ministry and Sumitomo Corporation is being financed jointly by the Japan Bank for International Cooperation (JBIC) and Sumitomo Mitsui Banking Corporation (SMBC). SMBC’s contribution is covered by the export credit insurance program of Nippon Export and Investment Insurance (NEXI), the official export credit agency of Japan.

It involves a total of about 600 units of construction and other equipment and some 500 vehicles at a cost of about 17.8 billion yen (around $158 million).

A successful outcome of the contract is a centerpiece of the Uganda government’s restated goal, mentioned in the last budget proposals, to build self-sufficiency in road construction and maintenance. However critics have also pointed out that it is expensive and often plagued by vandalism at district level together with dodgy accounting practices.

Last year, Matia Kasaija, the finance minister, said the government wants to, “Work closely with the private sector to support the development of local contractors through capacity building and facilitate increased local content in the road construction industry.”

The works ministry took up 15% of the $7 billion which was Uganda’s 2016/17 budget and has already placed an order for 401 units of construction equipment including wheel loaders and graders. According to Komatsu, the company will begin delivery in stages through Sumitomo Corporation after the contract becomes effective. Victoria

Komatsu plans to receive 10 people from the government to train in machine operation and maintenance at its training facility in Japan for two weeks before delivery in Uganda.  Komatsu will also dispatch one trainer to Uganda from Japan for a one month stint as back-up. The Japanese trainer will follow up and support the Ugandan trainers.

All equipment, installed with KOMTRAX (Komatsu Machine Tracking System), will be delivered to Uganda for the first time after the government’s approval of the KOMTRAX telecommunication. The company says monitoring the location of machines and the hours and conditions of machine operation, Komatsu will work to improve operational efficiency, cut down maintenance costs, and promote energy-saving machine operation, thereby further supporting job-site operations.