October 11, 2017 in Communications, Companies by Editor

October 11—KLM Royal Dutch Airlines, one of the oldest and biggest carriers in the world, not […] 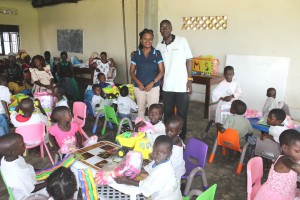 Otema (left) had a chance to see how the children quickly jumped into their new chairs courtesy of KLM Royal Dutch Airlines.

October 11—KLM Royal Dutch Airlines, one of the oldest and biggest carriers in the world, not only understands the civil aviation business, but also cares about the social life and well-being of the communities it serves.

ACCESS supports orphans and other vulnerable children through providing healthcare and education/training opportunities.

Otema said, “We are proud of ACCESS and we as KLM, we want to see children nurtured in the best way possible and provided with a conducive learning and playing environment.”

KLM donated a number of playing and learning materials including colourful children’s chairs, tables, boards, toys and water bottles among other items.

The ACCESS project, which started last year, is supporting over 30 children ranging from two to five years old who gather at ACCESS offices every Saturday to learn and play. The children at Nakaseke were drawn from six villages across the district.