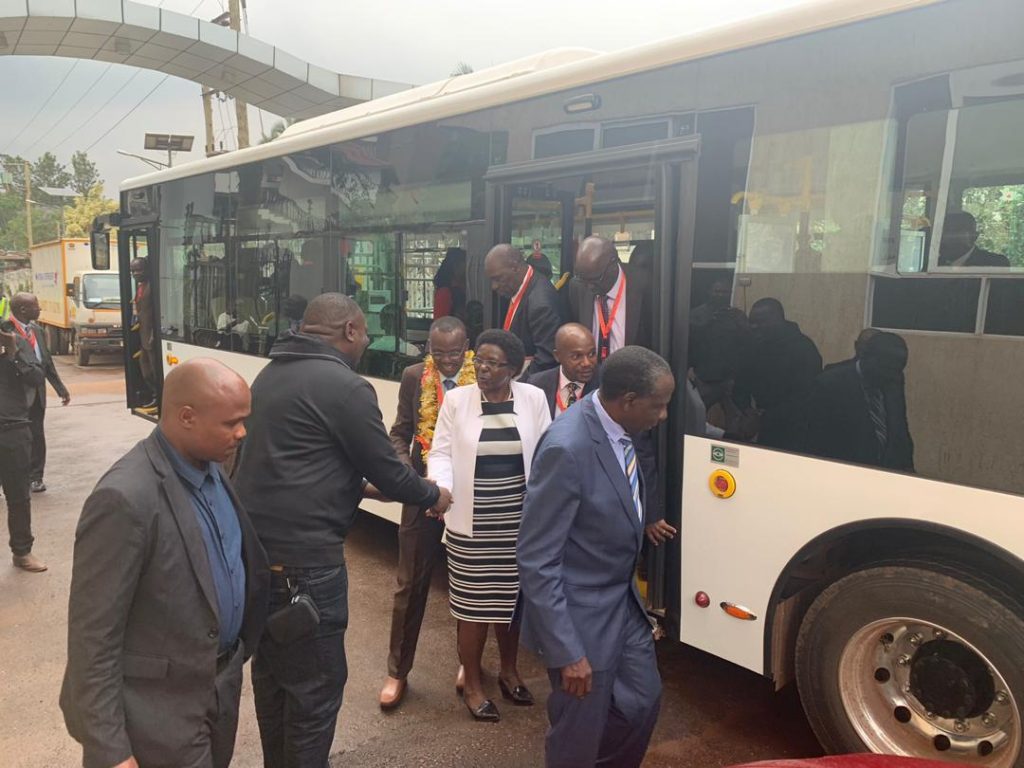 Africa’s green mobility pioneer Kiira Motors Corporation is capable of building 96 buses a year even before its plant under construction in Jinja is completed. The revelation was made by Kiira Motors KMC, chief executive Mr. Paul Isaac Musasizi as he conducted Dr. Ellioda Tumwesigye, the minister for science and technology around the assembly operation in Nakasongola.

Dr. Tumwesigye was in Nakasongola on December 4, to flag-off the first market validation vehicle, the 90 passenger Kayoola EVS bus on its ferry-trip to Kampala. The electric bus made the 150 kilometre run to Kampala in just under three hours and used only 35 percent of the available charge on the batteries. The fully electric bus has a design range of 320 kilometres which will consume only 80 percent of the charge.

Musasizi said that even before the 5000 vehicles a year plant that is under construction in Jinja opens in June 2021, KMC can build eight buses a month using the temporary facilities at Luwero Industries in Nakasongola where the second unit is nearing completion.

“We have four stationary assembly positions here. Once the teams are fully aligned and there is no more learning, we could build four units simultaneously,” Musasazi said adding that it would take the fully primed teams only 14 days to build a bus.

Dr. Tumwesigye sees an immediate closed loop market for that kind of output, if all government ministries snapped up the initial assembly run under the Buy-Uganda-Build-Uganda or BUBU initiative. He pledged to buy one unit for the science ministry.

“Government ministries should consider buying these buses from Kiira Motors because they have the capacity to supply,” Tumwesigye said.

The buses will start trial runs with paying passengers as soon as ongoing assembly of the second bus is completed.

While in Nakasongola, the first bus has been subjected to tests under Ugandan conditions. It was also taken through acceleration and braking tests using the runway at Nakasongola air base.

“From the KMC perspective, we now have evidence that it is possible to bring a new team up to speed very quickly to participate in the manufacture of buses. We have also learnt that it is possible for us to start developing the domestic supply chain.

He cited materials such as steel and aluminum which the local market is ready to supply. Luwero industries also has advanced materials research labs as well as computerized metal fabrication facilities which can be used to make some of the components going into the Kayoola.

KMC will begin assembly of a third bus in January but unlike the first two units, 70 percent of the materials that will be used in its construction will be locally sourced. This unit will be used to validate the local supply chain.

“We are keen to consolidate the domestic supply chain for materials in the short term. But we are also seeing a lot of potential for local collaboration especially when you look at the capacity housed in this complex,” Musasizi said.