September 27, 2017 in Business, Communications by Editor 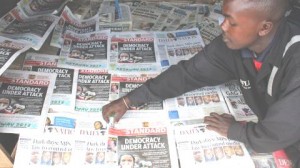 The report was put together by the PricewaterhouseCoopers South Africa and published last week. With a population nearly five times bigger than Kenya’s, the Nigerian market earned $125 million while in South Africa, newspapers made just over $650 million during 2016, but circulation is in decline.

No figures are given for Uganda in the survey that only covers, Nigeria, Kenya, Ghana and Tanzania. E&M Outlook says over the next five years, revenue in Kenya will grow at a 2.2%  compound annual growth rate (CAGR), totaling $192 million in 2021. CAGR can be thought of as the growth rate that gets you from the initial investment value to the ending investment value if you assume that the investment has been compounding over the time period.

In Kenya, advertising accounted for 73.8% of total newspaper revenue in 2016, reaching $126 million. Print newspaper advertising revenue continues to dominate despite growth in digital over recent years.

Digital newspaper advertising revenue will reach US$10 million in 2021. Standard Group, owner of daily publication The Standard and weekly newspaper The Nairobian, among others, offers a range of online ad packages, which can include banner ads on both homepages and mobile sites, along with social media mentions. Standard Group offers ‘sponsored article’ adverts, which includes four social media posts promoting the brand or product.

Small rises are expected in Nigeria to 2021 with total newspaper revenue reaching $127 million. However, inflation has inhibited advertising growth. High inflation rates have dampened the level of investment in advertising.

Referring to Tanzania, E&M findings show newspapers appear to be largely in good health. Aside from a dip in advertising revenue in 2013, both circulation and advertising have been on an upward curve, albeit beginning from a very low base for a nation of more than 50 million. 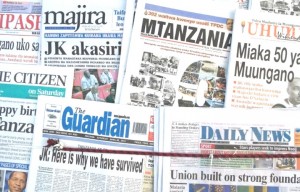 It goes on to state that the Tanzanian newspaper industry is as yet insulated from trends affecting the wider world. Digital disruption is at a minimum because fixed broadband and mobile Internet penetration is so low, meaning that print is the only possibility for large swathes of the population.