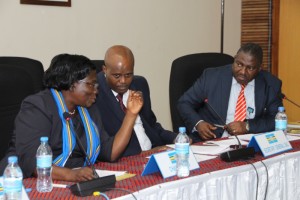 Edith Mwanje, the Permanent Secretary in the Ministry of East African Community Affairs in Kampala confers with Amb. Mfumukeko and Eng. Steven Mlote during the pre-budget conference.

September 5—Kenya and Tanzania continue to differ over the definition of ‘a non-tariff barrier’ even as an East African Community (EAC) conference held at the Secretariat in Arusha last week, has placed free movement of labour, goods and services as a priority expenditure in the proposed 2018/19 EAC budget.

Both are signatories to the EAC Common Market Protocol which basically lays out a tariff-free economic bloc and is the centrepiece of the ambitious integration project that caused the revival of the EAC in November 1999.

The EAC Pre-Budget Conference has agreed on six priorities that will strengthen integration. Amb Liberat Mfumukeko, the EAC Secretary General said, ‘’We therefore require priority areas and targets that can bring the EAC integration agenda to have impact on the lives of the citizens of East Africa, the actual owners of the integration process.’’

Priorities are a further liberalization of the free movement of labour, goods and services; improved cross-border infrastructure to ease the cost of doing business; enhanced regional industrial development and agricultural productivity.

Other priorities are transformation through investment in key priority areas;  implementation of the road-map for the attainment of the EAC Monetary Union;  strengthen peace, security and good governance and institutional framework for the EAC Political Confederation; improve socio-cultural welfare of the people in the region; and institutional transformation.

A donor-funded project to redesign major border crossings into One Stop Border Posts (OSBPs) is in its final phase of implementation. This has contributed to the steady rise of intra-EAC trade, but increasing competition among manufacturers around the region is influencing member state governments to impose unilateral restrictions.

Most of the development budget of the EAC Secretariat is funded by the European Union, the World Bank and Nordic countries. On a bilateral level, Germany is notable for paying for construction of the Secretariat headquarters in Arusha while Japan provided technical assistance for the OSBPs and the United States through USAID signed a five-year commitment to support several areas of EAC integration.

Meanwhile, Kenya and Tanzania are currently trading accusations of unfair trading practices with numerous incidents of lorries filled with an assortment of goods, being parked on either side of the common border waiting for the relevant official clearances.

According to the latest EAC Scorecard, that annually monitors member states trade openness, Uganda remains top performer while the EAC’s two biggest economies frequently get bogged down in disagreements over such items as cooking gas, poultry products, wheat and other cereals. Tanzania’s insistence on a business visa is also a major cause of concern for other member states.

A meeting between President Uhuru Kenyatta and President John Magufuli earlier this year and intended to resolve the simmering trade disputes apparently only had limited success.

The Pre-Budget Conference, which has become part of the EAC Annual Planning and Budgeting cycle, was attended by officials from the Partner States, EAC Organs and Institutions. The conference is in response to the Council of Ministers directive of involving as many stakeholders as possible in the process of formulating the EAC annual budget.