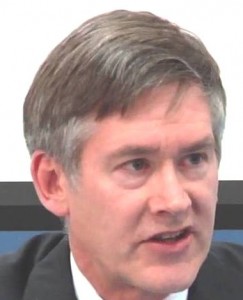 Clements led the IMF Mission recently in Nairobi to review Kenya’s economic prospects and have talks with top officials.

March 9—The Kenya government has given in to International Monetary Fund (IMF) pressure to do something about the interest rate cap law introduced in 2016 due to public anger at the then prevailing high borrowing costs, because now credit has dwindled and this has hurt business growth.

While the Central Bank of Kenya has kept the benchmark rate at 10%, commercial banks cannot charge more than 14% to their customers. This has made most banks reluctant to lend since the supply and demand equation has been distorted by the Banking (Amendment) Bill, 2015 which President Kenyatta signed into law in August 2016.

Growth of credit is at its lowest in more than a decade slowing to below 5% compared to 20% in 2014. At the end of February and early March, an IMF mission was in Nairobi for a regular review which included offering a carrot of extending the $1.5 billion stand-by facility (SBA) if the government could look into reversing the cap law.

In a statement, the mission head Benedict Clements, “Kenya’s medium-term outlook remains favourable, but headwinds from weak credit growth will weigh on economic activity in the near term.”

He said Kenyan authorities requested a six-month extension of the SBA that expires on March 13, 2018 to allow more time to complete the outstanding reviews of the IMF-supported program.

“In support of this request, the authorities have committed to policies to achieve the program objectives, including reducing the fiscal deficit and substantially modifying interest controls,” Clements said.

He said Kenya’s economy continued to perform well in 2017 despite a severe drought and a prolonged election period; however, real GDP growth is estimated to have slowed to 4.8 percent for the year as a whole.

Clements said, “Growth was mainly supported by public investment spending and solid non-agriculture sector performance. Inflation has declined to below the mid-point of the authorities’ target range, reflecting a substantial decline in food inflation and appropriate monetary policies. Annual headline inflation declined to 4.5 percent in February from 6.3 percent in 2016. The banking system has remained stable, and the Central Bank of Kenya (CBK) has continued to strengthen the financial system through its reform program.”