June 28—There was a turnover of nearly $20 million (about UGX70 billion) transacted through Kenya’s agency banking channel during 2016 involving half of the licensed 43 odd banks and use of 54,000 agents. 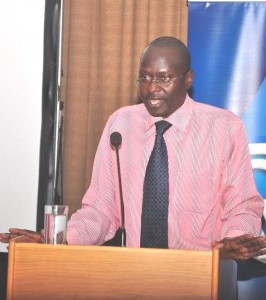 Owour said implementing Agency Banking will require that banks have strong IT structures.

Agents can include shops, supermarkets and pharmacies. Speaking during the Agency Banking conference organized jointly by Stanbic Bank Uganda (SBU) and the Uganda Law Society, Michael Owour representing the Central Bank of Kenya said the business model was first started in May 2010.

Last week, Bank of Uganda sanctioned Agency Banking in the country and Owour gave invited guests on Tuesday, some insight on implementation based on the Kenyan experience.

He said, “Implementing agent banking business requires banks to have strong IT structures and IT-enabled services to provide better channels, but peer learning and knowledge exchange is useful in implementing and regulating new banking delivery channels such as use of agents.”

He said bank branches are still relevant in acting as ‘a hub’ for the bank agents. However, agent banking is a major catalyst in expanding access and use of financial services as evidenced by the high number and value of transactions. According to Owour, several entities can qualify for acting as agents. The list includes Limited liability companies; Sole Proprietorships; Partnerships; Societies; Cooperative Societies; State Corporations; Trusts and Public Entities.

The steady penetration of mobile networks has also made agency banking more cost effective. Ground-breaking from the widespread use of mobile money services will make acceptance and adoption of agency banking much easier because there are some similarities between the two.  But agents for banks will be tasked with more complicated tasks.

Apart from handling cheque book requests, potential agents in Uganda can help customers with deposit and withdrawal; disbursement and repayment of loans; payment of bill;. payment of retirement and social benefits. Other services can include payment of salaries; transfer of funds and collection of account opening/loan documents.

Owour said the integrity of the agents was a vital consideration which meant banks had to carry out detailed background checks or due dilligence to ultimately protect their own reputations. “Reputation or brand damage can arise from poor customer care or service quality standards by the agents or fraudsters using agents to defraud bank customer,” he said

Agents charge no fees, but are obligated to issue receipts for every transaction. In turn banks are expected to have an effective supervision capacity.

He also cautioned on the possibilities of agents being used as conduits for money laundering or terrorist financing due to lack of stringent Know Your Customer (KYC) procedures by the agents. Another operational risk involves weak communication and IT systems and procedures, inadequate infrastructure such as power and physical security against theft/robbery of cash and equipment.