Kayoola Flagged off for UN Expo

KAMPALA, MAY 16 – Kiira Motors Kayoola Solar Bus is set to embark on the journey […] 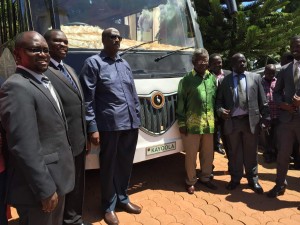 KAMPALA, MAY 16 – Kiira Motors Kayoola Solar Bus is set to embark on the journey to its international debut in Nairobi next week after Operation Wealth Creation Commander General Salim Saleh flagged it off.

KMC was invited to be the Green Mobility Exhibitor by Climate Action, the organizers of the Expo that will run alongside the United Nations Environmental Assembly runs from May 23 -27 in Nairobi, Kenya.

Flagging off the delegation that included minister for Science and Technology Professor Sandy Stevens Tickodri-Togboa and Kiira Motors CEO Paul Isaac Musasizi on May 15, Gen. Saleh commended Kiira Motors Corporation pioneering role in the establishment of the automotive industry in Uganda and noted that it would be a major contributor to Uganda’s progress towards becoming a middle income country in 2020.

“This is the right direction for our country to attain middle income status. And with your 13 year master plan you cannot fail in this mission,” Gen. Saleh said.

Saleh said the government should support the development of the automotive industry because of the many economic benefits and opportunities that will be created for the Ugandan people.

Professor Tickodri-Togboa, explained that the government of Uganda was exploring the establishment of Vehicle Manufacturing Capabilities in Uganda as a key Industrialization Intervention to catalyze Domestic High-Tech Value Addition for Economic Transformation of Uganda.

“We have a vision of a Sustainable and deep Rooted Domestic Automotive Industry, positioned strategically into the Global Automotive Industry Value Chain with emphasis on the Sub-Saharan Africa in the Short-Medium Term, Tickodri said.

The Minister observed that Kiira Motors mission of manufacturing vehicles by 2018 was a viable proposition for Uganda because of the  over USD 493 Million Per Annum CIF Value of vehicle imports and over USD 2.01 Billion in the East African Community which demonstrates great market potential in the 160 million people region.

Mr. Paul Isaac Musasizi, the Chief executive Officer of Kiira Motors corporation called upon government to speed up the process of putting in place a comprehensive National Automotive Industry Development policy and Institutional structure to promote vehicle manufacturing in Uganda.

Musasizi said that Kiira Motors Corporation (KMC) will create 12,000 direct jobs   create at the capital expenditure phase and another 2,000 will be created during the operation expenditure stage.

KMC was invited to be the Green Mobility Exhibitor by Climate Action, the organizers of the UN Sustainable Expo, in recognition of the nascent automotive integrator’s pioneering role in the development of relevant and zero emissions mobility solutions for Africa.

Musasizi said that by participating in the Sustainable Innovation Expo, KMC will be an opportunity to demonstrate Uganda’s and Africa’s commitment to championing green mobility solutions for Africa made by Africans. “We have moved from theory to a concept vehicle in a relatively short time and we are happy to share our story and experiences with the other delegates at the UN Sustainable Innovation Expo 2016 and the rest of the world,” he said.

The Sustainable Innovation Expo which traditionally runs alongside the United Nations Environmental Assembly is a high-billed event. This year’s event will be attended by more than 1,200 invited delegates from 163 countries including ministers, diplomats and business leaders along with technocrats. It is the principal platform where policy makers and high level decision makers discuss the most crucial issues affecting the environment, particularly in relation to sustainable development, poverty eradication and climate change.

“The Kayoola represents a step-change that has the potential to move Africa away from the pollution and safety risks associated with the dominant mode of public conveyance in its cities today,”Musasizi says.

During the COP21 meetings in December 2015, world leaders committed themselves the Paris Agreement to implement measures that will reduce the increase in global temperature to 1.5 degrees centigrade above pre-industrial levels.

Speaking about the significance of the Paris Climate Agreement for global sustainability, President Barack Obama told the American Congress: “I imagine taking my grandkids, if I’m lucky enough to have some, to the park someday, and holding their hands, and hearing their laughter, and watching a quiet sunset, all the while knowing that our work today prevented an alternate future that could have been grim; that our work, here and now, gave future generations cleaner air, and cleaner water, and a more sustainable planet.