KAMPALA, JUNE 20 – After a successful exhibition on the sidelines of the UN Environmental Assembly […] 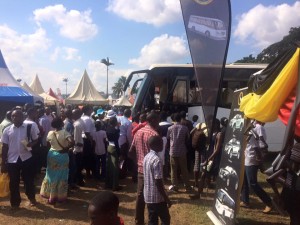 KAMPALA, JUNE 20 – After a successful exhibition on the sidelines of the UN Environmental Assembly in Nairobi last month, Kiira Motors Kayoola Solar Bus is on display at the Central Broadcasting Services (CBS) sponsored Powesa Trade Fair in Wankuluku Stadium where thousands of ordinary Ugandans are queuing up for a rare opportunity to come up-close with Uganda’s home grown and Africa’s first electrically powered public transport vehicle, the Kayoola Solar Bus.

The Kiira Motors Corporation built bus is being showcased at the Pewosa Trade Fair, in the first major public display, providing show goers an opportunity to see and hitch a ride on the bus that uses a conventional electric charge complemented by solar power to run for distance of 92 kilometres at a time.

The Central Broadcasting Service (CBS FM) is through its CBS-PEWOSA initiative staging the 4th Edition of the Cottage & Food Industries Trade Fair. Buganda potentate Kabaka Ronald Muwenda Mutebi is expected to make an appearance at the week-long event.

This is the next highly attended exhibition in Uganda after the Uganda Manufactures Association international trade fair that is staged every October.

“This will serve as an opportunity to have the public experience this marvel that has put Uganda’s innovation and adherence to green mobility on the international stage. The Pewosa trade-fair is an opportunity to receive feedback from the masses and the general public about the “voice of the customer” in as far as the Kayoola Solar Bus as a product is concerned,” said Mr. Allan Muhumuza, Kiira Motors Vice President for Sales and Marketing.

According to Mr. Paul Isaac Musasizi, the Chief Executive Officer at Kiira Motors, the Kayoola Solar Bus was built as part of Africa’s aspiration for a green, clean, and noise free solution for urban mass mobility in her major population centres.

“The sustainability of Mission Vehicles Made in Uganda is based on production of eco-friendly and internationally acceptable Technology and Products for global competitiveness. The Kayoola Solar Bus prospects a green, clean, and noise free transport solution for urban mass mobility to ensure transportation technology that is environmentally friendly,” he stated.

The Kayoola Solar Bus promises a green, clean, and noise free future transport solution for a Busy City like Kampala and others urban Centres in Africa. With nonstop sun in Africa the use of solar powered vehicles for mass mobility is the way to go for urban mass mobility.

Kiira Motors will start production of motor vehicles in 2018 with a product mix including Pickups, SUVs, Sedans, Light and Medium Duty Trucks and Buses. The first batch of vehicles will be running on fossil fuels with an internal combustion engine.