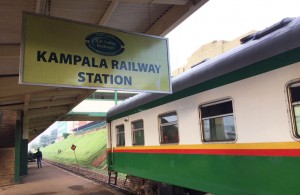 KAMPALA DECEMBER 15- Kampala’s long promised light commuter rail has moved out of the conceptual phase after the Ugandan government and Chinese civil contractor China Civil Engineering Construction Corporation CCECC, signed a Memorandum of Understanding (MOU) for the construction of a $440 million light rail commuter network for greater Kampala.
The initial network will cover a total of 35-kilometers running from the city centre to surrounding areas in Wakiso district and 240 kilometres when complete. The project comes on the back of the resumption of a passenger train service between Kampala and Namanve on December 7, using the existing metric gauge rail.
Kampala’s metro-light rail also comes months after Ethiopia commissioned a similar service for its capital Addis. But Uganda’s Minister for Works, Engineer John Byabagambi, said during the signing ceremony said that Kampala’s network would be superior because it will employ a suspended design that avoids road intersections.
For CCECC the Kampala metro contract is an add-on to a similar MOU for construction of the western leg of the standard gauge railway that will connect Rwanda to Mombasa port.