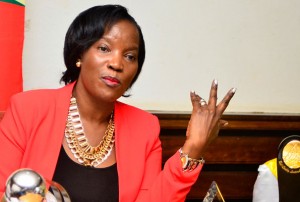 Musisi has overseen KCCA annual revenues surpass those of the defunct Kampala City Council  by nearly 200%.

April 11–Kampala Capital City Authority (KCCA) has seen a 180% growth in revenues to UGX84.9 billion (about $23 million) for the financial year ending 2015/16 compared to the UGX 30.3 billion that was recorded six years ago. Last month the contract of Jennifer Musisi, the KCCA Executive Director was renewed for another three years.

KCCA came into being during 2011 after the former Kampala City Council (KCC) was scrapped.  For several decades, KCC was beset with corruption and poor service delivery. Amidst public outcry, the government finally decided to reorganise City Hall.

By an Act of Parliament the position of Executive Director was created to head day-to-day operations of Uganda’s capital and a new authority set up. Musisi is in her third term now.

According to the Kampala Capital City Authority Six Year Summary Performance Report,  UGX 61.4 billion has already been collected between July 2016 to February 2017 which indicates KCCA is on course to surpass the UGX84 billion figure collected during the previous financial year.

KCCA officials say improved revenues is as a result of measures that were adopted in the recent past including automation of collections. Unlike before, clients can now pay by way of different platforms including EFTs, online banking and mobile money. This has reduced pilferage and improved service delivery to clients.

“To improve revenue management, KCCA introduced an electronic revenue management system called e-Citie which provides online services for tax payments,” reads part of the report.   According to one recent consultancy, KCCA’s reforms to date have achieved significant increases in own-source revenues, and have made the Domestic Revenue Committee (DRC) a leading example of a revenue administration for other African cities, and for cities in developing countries.

The report points out that with introduction of the e-citie system, over 400,000 transactions have been recorded and over 109,684 tax payers have registered on the system.

KCCA has  also set up a one-stop revenue centre at City Hall. Clients can now be provided with information regarding payments for relevant services within minutes. Today one can acquire a trading license in one day and not the 30 days as was the case in  2011.