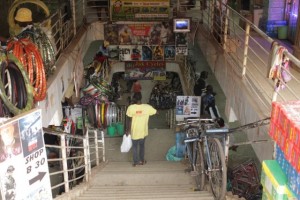 It is the small traders who sub-let in the city’s numerous arcades that feel the most financial strain and convenient alternatives are very few.

June 14—Kampala Capital City Authority (KCCA) is unhappy at the way owners of several shopping arcades in the Central Business District are using KCCA legitimate demands for property taxes as an excuse to raise their rents.

“We have been and are continuing to apply 6% on the ratable value of properties. In fact, some local governments and urban authorities outside Kampala are already charging more than 6%, but KCCA hasn’t increased,” Fred Andema, the acting Director, Revenue Collection at KCCA said recently.

Officials at City Hall say the formula for determining the relevant property tax has not changed so there is no reason for building managers to penalize tenants. Those who decline to pay the tax face a hefty fine.

In March 2016, KCCA started a property valuation exercise in central Kampala to update the valuation roll which is essential for tax administration and to add new properties onto the list. The KCCA is also keen to fully exploit its revenue base in light of declining financial support from the central government.

Andema said the last time KCCA valued properties for rating was 12 years ago. There was a supplementary valuation (for new buildings) in 2011, but basically KCCA has been charging property rates on the basis of rents that landlords were charging in 2005 and is now charging rates based on the rent the landlords are currently charging.

In recent weeks, tenants at some popular shopping arcades in the CBD, have been notified of rent increases involving as much as 20% to 30%, with landlords claiming this is the only way they can afford to pay the KCCA property taxes.

Wilbur Tumuhimbise, a trader in the Giate building said rent keeps going up and the excuse given by the management is that taxes are so high these days, they also have to increase to cover their costs.

“We are almost being forced to close the business, because of high rent. The landlord said they are now being asked for property tax and rental tax which makes the total tax paid for a building very high and hence the increased prices,” Tumuhimbise said.

Uganda Revenue Authority (URA) collects rental tax and of late it has announced plans to step up efforts in ensuring more compliance.

Allen Mwine who sells textiles in Mukwano Centre shoping arcade said the government is equally to blame by failing to resolve the double tax complaints by the landlords. This shifts all the burden onto them, the traders.

‘’Landlords do not want to make losses. Whenever taxes are increased, the burden is shifted to us by them raising the rent and we are not even allowed to question under which circumstances rent is increased. This is devastating for our businesses,” Mwine said.

Another trader told 256BN, “We are being squeezed by two powerful forces and none seems to care about our interests.”

However, KCCA has continued to clarify that rental and property tax are not the same and both are provided for under the law. Peter Kaujju, the acting Deputy Director for Public and Corporate Affairs said, “Rental tax is collected by URA while KCCA collects property tax. These two are provided for under the law. We are only following the law. If the community feels that the two taxes are the same, then they should raise the issue with the law makers because our job is only to implement the law.”

He said anyone who does not comply with the law concerning property tax will be taken to court and liable to a fine of UGX 50 million (about $14,000).

Property tax is provided for under the local government (rating) act 2005 and amended in 2011 provides for a charge of property rates between 2% to 12% of the ratable value of a property so as to determine the property tax payable by such a property. The ratable value referred to above is the annual rental income earned by a property adjusted for conservancy fees (utility costs, minor repairs and maintenance etc).

The exercise which started in the central division of Kampala city has registered over 15,018 properties. Of those KCCA has received a total of 582 objections from property owners in regards to the assessed property tax while the rest were with respect to details of particulars of the various properties such as wrong address etc

Property owners with complaints are already visiting the valuation court at City Hall which has been sitting to hear complaints for the last  two weeks.