July 31—The Kampala real estate market remains subdued. This is in line with an economy that […]

July 31—The Kampala real estate market remains subdued. This is in line with an economy that is recovering from a less than 4% GDP growth rate in financial year 2016 as sellers or renters of residential property see fewer buyers or potential tenants compared to two or three years ago. 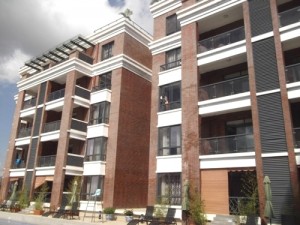 Faced with budget cuts, several organisations including international NGOs, are telling some senior staff to shift from standalone houses to new apartments with lower overheads.

However demand for apartments remains encouraging according to the Knight Frank (KF) Uganda Market report for the first half of 2017. Demand for office space is also gradually rising. Knight Frank is the world’s leading independent real estate consultancy and has been in the business for over 110 years.

Concerns about liquidity continue to affect market sentiments in spite of the fact lending rates have been falling since late last year. Although the Central Bank Rate (CBR) has dropped to a six year low of 10% in June 2017, the economy has contracted by 0.8% by the middle of this year.

The KF Uganda Managing Director, Judy Rugasira Kyanda said, “There has been a noticeable increase in take up of residential apartments over the past six months, however this is not purely new demand, but mainly from tenants whose tenancy agreements have come to an end and are moving to newer and more modern accommodation, at nearly the same or just slightly higher rentals.”

Activity in the apartment segment is mostly due to rental budget cuts by many organisatons, which has compelled their expatriate staff to move out of stand-alone houses into apartments where overheads are perceived to be lower. KF Uganda offers a comprehensive range of property agency, management, valuation and consultancy services in Uganda,

The report cites that sales transactions registered are still not at the pace they were at two to three years ago. KF says it has seen numerous enquiries for houses in the UGX 350milion (close to $100,000) to UGX 650 million price range, but very few follow through to conclusion after the mortgage application stage. Potential purchasers are citing the unaffordable interest rates when they go through with the loan application process.

According to KF Uganda, buyers are taking advantage of the ‘slow-down’ in the performance of the residential sector over the past 24 to 36 months, and are driving hard bargains with a view to paying highly discounted prices for properties. However, vendors are also holding on for as long as they can in the hope that they will get an acceptable price before they are forced to sale.

On the other hand, the property and consultancy firm says interest is still strong for residential accommodation in the suburbs of Naguru, Mbuya and Bugolobi. ‘The major drivers of this demand is coming from private organisatons, corporate companies, and oil and gas consultancies and other related services,’ the report states.

Generally, there has been an increase in the supply of prime residential stock for rent on the market over the past 12 months. The report states, ‘This supply is in the prime suburbs of Kololo, Nakasero Bugolobi, and Naguru. Kololo and Nakasero is seeing increasing redevelopment of old residential plots of between 0.50 – 1.00 acres, in line with the zoning regulations of these locations. Most of these residential developments are two, three and four bedroom apartments, all rooms en-suite, and some with a house help’s room. Additonally, swimming pools, gyms, and children’s play areas have become standard facilities provided at the new residential developments’.

When it comes to commercial property, KF research has seen a rise of 8% year-on-year growth in occupancy rates for Grade A/AB buildings in Kampala from 80% registered in first half (H1) 2016 to 88% in H1 2017.

Approximately 16,000 square metres (m2) of prime commercial Grade A/AB office space has been leased during H1 of 2017 in Kampala. The report cites that the comparative advantages for properties which are attracting tenants and or maintaining high occupancy rates are intelligent buildings which are energy efficient with adequate parking space, usually out of the core CBD areas. These days, this includes North East of Kampala Road towards Yusuf Lule Road, Kololo and Lugogo By Pass (Rotary Avenue).

However, the ongoing road network improvement by way of the Kampala flyover construction and road upgrading Project (KFCRUP), will change the dynamics of the city immensely, with regards to accessibility, and ease of movement.

This will redefine the location parameters for commercial property developers and occupiers. Yields for Grade A office space have remained stable between 10% – 11%, and asking rentals are between $15– $17 per m2 per month while grade B office rentals are averaging between $9 – $12 per m2 per month.

Development opportunities in the ‘built to suit niche’ for multinational companies and other global and regional agencies continue to grow, as the emphasis on efficient Corporate Real Estate Services continue to take priority in most of these international organizations.

With the anticipated oil production preparatory activities taking shape and conclusion of the Front End Engineering Design (FEED) of the oil refinery, the commercial office space outlook for the next three years looks optimistic against a backdrop of renewed interest by the oil and gas companies. This is likely to positively impact the demand for prime office space in the medium to long term.

The report says during H1 of 2017, the retail sector experienced a slowdown in leasing activity as investor confidence was dampened by the challenges of Nakumatt, East Africa’s largest retailer by size, number of stores and area occupied. These challenges resulted in substantial financial liabilities to banks, suppliers and landlords alike. In spite of the Nakumatt woes, primary data from Knight Frank managed malls in Uganda reveals that footfall traffic grew by 20% in H1 2017 compared to the same period last year.

KF Uganda registered a 24% hike in valuations instructions in H1 2017 compared to the same period in 2016. This is partly attributed to a 27.5% increase in bank lending activity year-on-year in H1 2017 due to continued reduction of the CBR which has forced financial institutions to reduce their lending rates.

A continued reduction of the CBR could mean a further reduction in bank lending rates by the more proactive banks to as low as 18% (one bank has already pegged its prime rate at 18%), which will renew interest in borrowing and subsequently house purchases and home ownership. That said however, investor confidence with regards to large scale property development remains low and continues to dip, owing to the uncertain economic outlook.