September 25, 2018 in Business, Transport by Editor 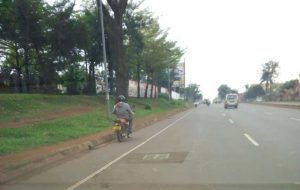 September 25,2018 – Kampala Capital City Authority KCCA, has began marking cyclist lanes on city roads. So far, the lanes that are supposed to separate two wheel traffic from automobiles have been introduced on Archer Road in Kololo and the section between Kitgum House and the Lugogo Bypass junction on Jinja road.

KCCA head of communications Mr. Peter Kauju says the lanes will be rolled out progressively as the Authority widens the city’s motorways.

The lanes have been in operations for a couple of weeks now but their impact on the road culture of Bo-boda riders is yet to become evident since both them and regular motorists appear to be unaware of the purpose of the lanes.

Two-wheelers have become an integral part of Kampala’s public transport system and a popular mode of navigating the capitals notorious traffic snarl-ups. But their huge numbers – estimated at 50,000, has become a contributing factor to the chaotic city traffic and a safety concern.

Efforts to regulate their operations have so far proved futile although digital hailing services for the bikes promise a more organised future.

The Authority has in the past promised to introduce bus lanes under the rapid mass transit system but this is yet to be implemented.