KAMPALA, DEC12 Following in the footsteps of Nairobi and Dar es Salaam that have already established […] 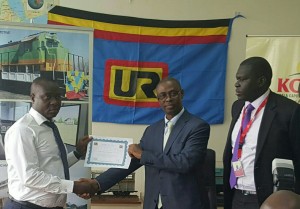 Following in the footsteps of Nairobi and Dar es Salaam that have already established passenger train services, Kampala today announced the commencement of a commuter train service starting December 7.

To be operated by Kenya Uganda concessionaire Rift Valley Railways under a separate concession for one year, the trains with a capacity to carry 1000 passengers on a single trip will provide a morning and evening shuttles from Kampala central terminal, to Namanve railway station, 12 kilometres east of the capital.

The service which has been on the cards since 2013 comes as partnership between Uganda Railways Corporation, RVR and the Kampala Capital City Authority. URC Ag. Managing Director Eng. Charles A. Kateeba, said “the three partners had agreed to resume passenger services following signing of a Passenger services agreement in November to run the service as a pilot for a period of a year.

The results of the pilot Kateeba says will provide the hard data and information needed to inform further development of the service and the planned expansions to the greater Kampala metropolitan area.

“This is a pilot meant to enable us to get data on the operating costs, the numbers and mix of passengers and their preferences. That will give us the characteristics of the passengers we are serving and what products we should provide to serve them,” Kateeba said adding government would through the Kampala Capital City Authority be providing a subsidy to bridge the deficit between operating costs and revenue.

To that end, KCCA has already advanced URC an initial one billion Uganda shillings ($295,000) that will be continually topped up as based operating costs returns.

“ The government is fully committed to this service the only question will be to what extent and how much. If we find that the service is well received, we can make a case for more investment and other incentives,” Kateeeba said.

URC will be in charge of selling the tickets and customer care, RVR will operate the trains, construct and maintain the stations and stops at Kampala, Nakawa, Kireka, Namboole and Namanve.

Explaining why the city council has been so eager to introduce commuter rail services Charles Ouma KCCA’s – Deputy Director Policy & Advisory Services, said “commuter rail forms an integral part of KCCA’s long term transport master plan because it will help reduce the pressure on road traffic particularly during the rush hours which has becoming increasingly problematic for city workers”. He added our Executive Director has said repeatedly that she welcomes and supports all initiatives that can make transport cheaper for the ordinary Wananchi. As KCCA, we are pleased to be partnering with URC and RVR and making this a reality for the benefits of citizens of Kampala.

Representing RVR, Mr. Charles Ssentongo said the operator had invested heavily in the rehabilitation of key infrastructure and purchase of new rolling stock which has resulted in improved efficiencies and transit times. “The introduction of passenger services represents just but another piece of the jigsaw in the transformation of the railway,” added.

The resumption of passenger train services puts Kampala at par with her Kenyan and Tanzanian counterparts where railway transport is already helping significant numbers of urban commuters efficiently move between their neighbourhoods and work places. RVR’s commuter network in Nairobi on average serves 30,000 passengers daily while Dar es Salaam has two separate services operating on the Tazara and Central lines where it serves huge populations.

The estimated journey time will be approximately 40 minutes either way at a cost 1,500 shillings (44 US cents) per journey. Passengers will also have the option of purchasing a one day return ticket at 2,500 shillings (73 US Cents).