July 28, 2018 –After a protracted seven months during which potential deal-spoilers popped up, cash-strapped Buganda […] 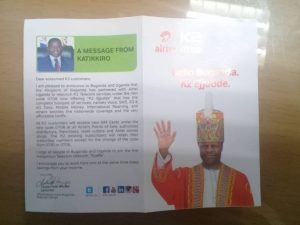 July 28, 2018 –After a protracted seven months during which potential deal-spoilers popped up, cash-strapped Buganda kingdom linked K2 Telecom and Airtel Uganda, have concluded an agreement for a merger of their services.

Effective yesterday, ex K2 Telecom subscribers will be migrated from code 073 to Airtel’s code 0708, finally putting into motion an agreement under which K2 shareholders will earn a commission from sale and call originating from the kingdom linked code.

In amessage to subjects yesterday, Buganda Premier Charles Peter Mayiga announced the relaunch of “K2 ejjude” that will now offer the full range of services including SMS, 3 and 4G data, financial services as well as international dialing and roaming.

Speaking to media on Friday, Abdu Salaam Waisswa the legal chief at the Uganda Communications Commission said under the agreement, Airtel had assumed responsibility for all K2’s network and quality issues for three years running until July 2021.

The activation of the deal is a welcome relief for K2 which has been off-air since the third quarter of 2017. The deal which has been under negotiation since last December was almost scuttled by disagreement over liability for Ush94.8 million (about $25,000) in accumulated tax arrears by K2 and a move by the URA to auction the telco’s assets.

Sector regulator UCC stepped in to arbitrate a way forward in June, culminating in Friday’s announcement.

Under the deal, interested customers can buy co-branded K2-Airtel sim cards with K2 earning a royalty from each sale. After reaching a peak of 600,000 subscribers, K2’s base had shrunk to just over 100,000 customers by the time a decision to piggy-back on Airtel was taken.

The deal helps K2 gain access to a nationwide footprint and data services while Airtel can ride on the sentiments of a captive market of Buganda loyalists.