June 11, 2018— A verification exercise of some 10,000 electricity meters is about to be carried out in a joint operation by the Uganda National Bureau of Standards (UNBS) and Umeme, the listed power utility that has a 25- year concession ending 2025. 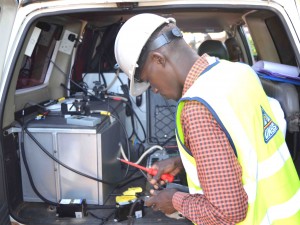 Officials say the verification exercise is intended to protect both the consumer and power distributor by doing away with faulty meters.

The Electricity Regulatory Authority is also involved in the campaign, but no specific details about dates have been disclosed.

“We have stated with Kampala, because of the large population.But the exercise will cover the whole country and those meters found with technical  faults will be retained because it’s not fit for the purpose it supposed do so,” Edward Ekuru, a legal metrologist at UNBS told a media briefing Monday.

Officials say the intent is to protect consumers and also help Umeme reduce on its distribution losses because of faulty meters.  Ekuru this comes after an increasing number of Umeme customers continue to complain about their meter readings.

To date, pre-paid (Yaka) connections number just over 65% of total connections while the rest rely on meter readings to determine electricity consumption. However post-paid customers still make up more than 80% of total Umeme revenues, though plans are get as many customers as possible on Yaka. Umeme says energy losses have come down from 30% in 2010 to under 20% today, but according to experts still relatively high.

Ekuru said, “With this meter verification exercise, we are aiming at protecting the consumer and the utility company to promote fair trade. As UNBS, we are acting as arbitrators. We want to check the meters to see that both parties are not cheating each other. So the exercise is about verification of meters that have served in the field for long time, to see if they still retain the accuracy in units reading.”

Ekuru said over time, meters can develop technical faults which may end up  either  benefiting the consumer or the power distributor which in the long run is unfair to both parties.

UNBS is also legally bound to verify prepaid power meters after five years. According to Godwin Bonge Muhwezi, the UNBS spokesperson the Bureau will be carrying out verification on all meters imported into the country to ensure that customers are not cheated.