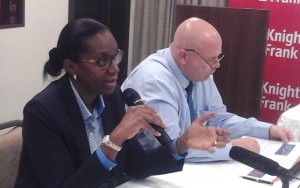 Judy Rugasira Kyanda wants the government to be cautious when it comes to over regulating the property market.

January 23—Concerned about the possibilities of the government giving in to incessant demands by some business people to halt payment of rent in United States (US) dollars, Knight Frank (Uganda) has once again cautioned about the adverse risks of an over regulated real estate market.

The local subsidiary of the international real estate consultancy, management and research firm, expressed the same sentiments last year amidst calls for a change in the regime.

“Government needs to be less hasty in its attempt to regulate the property sector by applying knee-jerk reactions to complex and structural issues like the dollars- shilling rental regimes. Such poorly  thought out and hurriedly implemented solutions  without  the involvement of key stakeholders and professionals in the property market pose a bigger threat to the recovery of  this sector and may  only drive it deeper into stagnation,” Judy Rugasira Kyanda, Knight Frank (Uganda) managing director told a news conference recently.

The property market is recovering from the lows seen in most of 2016 when supply outpaced demand in line with the general downturn  of the Ugandan economy.

Business people under the Kampala City Traders Association (KACITA) have for several years now complained that commercial property owners are exploiting them by insisting on dollar payments that become steeper when the Uganda shilling slides in the foreign exchange market. This often spikes the cost of doing business when the shilling depreciates against the US dollar.

Attempts to raise a private member’s Bill in parliament have floundered due to the intense lobbying on both sides surrounding the issue while the government maintained a neutral silence. However sources say new regulations are being drafted that tilt towards the KACITA stance. KF (Uganda) have suggested that preventing property owners from charging in US dollars discourage new investments in property development, because a large percentage of this money is borrowed in dollars and not Uganda shillings.

She said the government needs to do more studies to see if any proposed changes can work in a country like Uganda.  “Since we operate  in a liberal  economy, market  forces  have proven  to be  a more  effective  means  of regulating  property  markets  because they respond to customer wants  as well as to changes in industrial  and business practices,” she said.

Reviewing 2017, Rugasira said there was high demand for office space and residential alongside the higher demand for land valuation services especially from the commercial banks.

She said, “There has been  a 10% increase in inquiries  for grade A office  space in the second half of the year compared to H1 in 2017. This demand continues  to be dominated (85%) by organisations looking to relocate or expand and start up organisations (15%) with most being companies and consultancy  firms affiliated  to the oil sector.”

The apartment sector also showed gains. “Our research indicates that that there was a 70% increase in demand for serviced apartments in Kampala. The drivers for the demand were short term leases (1-66 months) which increased to 70% between the period of October to December in the reviewed year,” she said.

The main drivers for increased demand for short rents in Kampala according to the KF Uganda report,  was an increase in the number of Ugandans  living  in the diaspora and returning  home  for the Christmas holidays and requiring short term accommodation.