August 18—Finance minister Matia Kasaija has advised farmers in areas where refugees have settled, to take […] 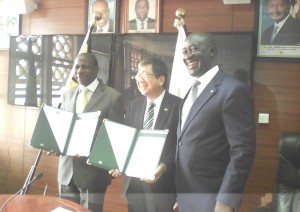 Kasaija and Ambassador Kameda line up for a photo opportunity as Ecweru looks on.

August 18—Finance minister Matia Kasaija has advised farmers in areas where refugees have settled, to take advantage of the situation by planting more food crops and earn higher income, because lack of capacity also means donors like Japan buy food rations somewhere else.

’There is a big need for foodstuffs for the big number of refugees in Uganda. It is however unfortunate that most times, organizations like the World Food Program and other donors have to buy food from foreign countries to come and feed these refugees and yet Uganda has the potential to produce enough food for ourselves as well and even spare more for sale,’’ he said during a ceremony to receive a donation from the Japanese government.

The Minister said as much as Uganda would not wish for these refugees to be in this predicament, Ugandans should also consider the benefits of having them in the country. Uganda is home to over a million refugees mostly South Sudanese women and children fleeing insecurity and at one stage famine. They are spread over 22 settlements and Japan has donated 5,340 metric tonnes of rice worth $3.2 million to help feed them.

The Japanese Ambassador to Uganda, Kazuaki Kameda said they donated rice because of the current food insecurity problem in Uganda caused by an extended dry spell last year and low production levels. he said,  “The World Food Program Uganda has announced that the shortfall for food assistance in Uganda by the end of this year, will be an estimated $63 million. We therefore found it right to donate rice to assist in this enormous need.”

“Also reports show that there is food insecurity in Uganda due to drought, irregular precipitation patterns and disease that have lowered food production and resulted into food shortage and famine. This kind of situation must be even worse for refugees who do not cultivate their own foods and only depend on donations,” the Ambassador said.

He asked the Uganda  government to continue empowering the refugees through education and economic assistance but also to work towards achieving peace in conflict areas.

Kasaija said, “if we were able to produce this much rice, then the government of Japan would have bought rice from our Ugandan farmers and the $3.2 million would be invested directly in the Ugandan economy to boost it. There have been a lot of opportunities especially when it comes to the welfare of refugees and in most cases, Uganda has been left behind because we lack capacity to supply the big tonnes of food necessary.”

Musa Ecweru, the junior minister for disaster preparedness and said, “We do not only look to only feed these refugees. We want to empower them economically; give them education where possible as well as health services. Instead of always receiving donations, we want them to cultivate and produce food.”