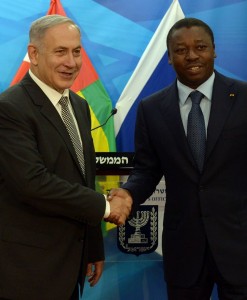 Netanyahu and Togo’s Gnassingbe in a photo-op during the latter’ visit not long ago.

March 24–After being unceremoniously rejected by most African countries in the wake of the October 1973 War with the Arabs, Israel is extending a friendly hand to those interested in developing trade and business links as well as take advantage of its advanced technology in such areas as agriculture.

Togo, one of Israel’s most loyal friends, is hosting the first Africa-Israel Summit,  together with the Israeli diplomatic service as well as Africa-Israel Connect. Under the theme, ‘Innovation for a shared prosperity’, the summit is scheduled for October 2017 in Lome. Togo restored diplomatic relations with Israel in mid-1987.

Present total trade between sub-Saharan Africa and Israel hovers at the one billion US dollars mark.

Bruno Finel, CEO of the Africa-Israel Connect said: “The Africa-Israel Summit is a unique opportunity to fulfill the formidable potential of heightened cooperation between Jerusalem and the African continent. Moreover, Lomé is an ideal venue to hold the Summit. Indeed, the city regularly hosts high-profile conferences and President Faure Gnassingbe is a historic and faithful friend of the Jewish state. In addition, the President’s proven commitment to proactive and dynamic diplomacy is an invaluable asset to the success of the Summit.”

Last year, Avraham Neguise, an Ethiopian-born member of the Knesset (Israeli parliament) said,  “Relations between Israel and Africa are very important for our mutual interest. Israeli technology in agriculture, water, solar energy and other high-tech is very important for Africa.”