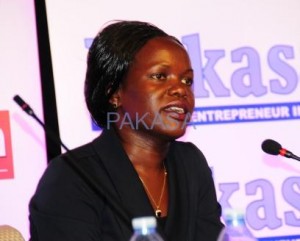 KAMPALA OCTOBER 13- Economists have cast doubt on the likely impact of the proposed recapitalisation of the Uganda Development Bank UDB on the current slowdown of Uganda’s economy, being blamed on a contraction in credit to the private sector.

During a UDB customer engagement breakfast that run under the theme “Partnering for social economic transformation” economists argued that besides recapitalising the Bank, Uganda’s economy would need other interventions to thrive.

“The market rates at 25 percent and 26 percent are still high. No single borrower can borrow at 25 percent and get a return on investment be it in agriculture, infrastructure or export. Government has to stop crowding out the private sector. It has to get out of the financial market because no borrower can compete with government and at 25 percent and double its digits, and still break even,” said Gideon Bagadawa the Executive Director at the Private Sector Foundation Uganda (PSFU) adding “we are also still faced with a huge trade deficit. We need interventions to all these factors if we are bent on reviving our economy. We need interventions of a policy nature.”

Junior finance minister in charge of planning David Bahati insisted recapitalizing UDB to the tune of $200m was one of the channels was using to ease pressure in the credit market. The money that will come along in monthly installations of $50m per month will be ring-fenced for lending to agriculture, tourism, oil and gas, he said.

UDB Chair Samuel Sejjaaka once released, the capital injection would go a long way to ease the interest challenge the economy is currently grappling with.

Until they see the money, the private sector however remains skeptical. “Government has been promising to recapitalize UDB for the last seven years but has not yet delivered. Where is the $50 million going to come from, and when is it coming? We need a clear timeline on when this deliverable” Badagawa asked.
He also questioned whether the Bank had its own interventions that would enable them execute their mandate without waiting for recapitalization from the government.

Patricia Ojangole the bank’s CEO o said with support from government, the Bank had been able to secure at least $50m from other sources of funding which would help them execute their mandate.