November 9, 2017 in Business, Investment by Editor

November 9—The rate of new investments in Uganda is up thanks to an improving enabling environment according to the Uganda Investment Authority (UIA) however this comes after the 2018 Ease of Doing Business survey rankings has Uganda dropping seven places to 122nd.

Latest UIA figures show for the fourth quarter of 2016  and the Q1 for 2017, licensed investments leveled off at $641 million against a target of $200 million representing  a performance three times the expected value. However the figures do not give the amount actually invested, but planned expenditure which tends to flatter.

Jolly Kaguhangire the UIA  Chief Executive Office said in the same period the Authority also managed to register 164 projects  with  an estimated  28,503 planned  jobs. She said the good performance was due to reforms that are taking place at the UIA . 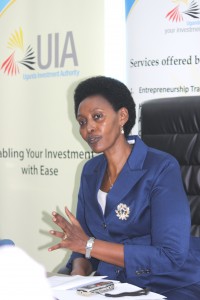 Kaguhangire said the seamless services being offered at the UIA one-stop-centre had encouraged new investment.

“The good performance trends in the reviewed  period are largely attributed to easing the licensing process and implementation of key reforms at the Authority. This has helped the top management to execute their duties effectively,” she told a news conference in mid-week.

These include completion of the one stop centre at the head offices which provides better seamless services in a friendlier environment. “This  has greatly  reduced  waiting time  for  the investors  since all the necessary  services such as  business registration, immigration services, land registry can be accessed at the centre.  We encourage all investors, both local and foreigners to utilize the centre, because it has reduced the cost of doing business especially for the starters, “she said.

Kaguhangire said plans are to continue working with Uganda’s, foreign mission abroad, because of the good working relationship that has emerged through this arrangement. But the UIA boss also highlighted the negative perceptions among a wide cross-section of Ugandans who still believe UIA favours foreign investors at the expense of locals which was not true.

UIA wants to  engage with different  government Ministries, Departments  and Agencies  to jointly  partner  with international media brands to promote Uganda  as the  preferred investment destination in the region. Other strategies include UIA working with development partners to accelerate the Kampala Industrial and Business Park which will cost $115 million.