November 16— Jolly Kaguhangire, the Executive Director of the Uganda Investment Authority (UIA), was in western […]

November 16— Jolly Kaguhangire, the Executive Director of the Uganda Investment Authority (UIA), was in western Uganda recently to find out why a major project had stalled leading to the allocated government land being overrun by encroachers, many of  whom are suspected to be foreigners. 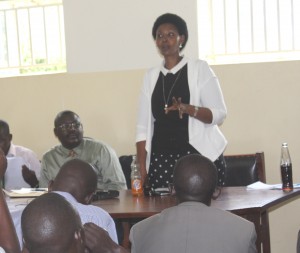 Speaking in Masindi recently Kaguhangire placed most of the blame on the investors for the laxity in implementing their projects that encouraged the encroachers.

Just over two years ago, Critical Mass Group (CMG) Limited and Capital Ventures Limited were each allocated 10 sq/m. for the purpose of engaging in cattle keeping, goat ranching and beekeeping.

In an immediate stop-gap measure, UIA is repossessing 75% of the land and will soon begin evicting the encroachers, but it is not clear whether the investors will get back the 15 square miles once the exercise is done.

Kaguhangire blamed CMG Limited for underutilizing the land which had resulted in the growing influx. According to a UIA statement, Kaguhangire had a meeting with all the relevant parties at the Masindi District Headquarters last week.

In attendance were community leaders from Kimengo, Mabati and Kiryana sub- counties and the CMG representatives in a bid to reach a compromise.  Kaguhangire told the local leaders to engage the encroachers so that they vacate  the land by the end of this year.

Several thousand people in the three sub counties are currently settled on the 20 square mile chunk of land.  However,  Faith Njeru, the CMG General Manager told UIA that they have held several meetings with local leaders to discuss how best the encroachers can be handled, but no solution had been found yet. She said the encroachers had pulled down fences, destroyed property and stolen livestock.

Godfrey Nyakahuma, the Resident District Commissioner of Masindi District, said the situation posed a security risk because of underutilization by the investor. “There is no any activity on the land apart from hiring it out for charcoal burning and temporary crop growing. We as leaders feel that UIA as the landlord, should come up with a possible way forward to ensure that the land is put to full utilization by the investor,” he said.

He informed UIA that there is an ongoing profiling of the encroachers to get a clear distinction of who is a Ugandan and who is not since CMG managers had been renting some of the land to allow people to graze animals and grow crops.

UIA purchased 20 sq/m land from Bunyoro Growers Co-operative Union (BGCU) in 1998. It lies between Kafu to Masindi Town road (with accessibility points at Kimengo and opposite Kiryana Ranch) and Masindi Town to Masindi Port road (with accessibility at Kaduku, 8 kilometres from the Gulu highway. The land is approx 210 km from Kampala on the Kimengo side and 230 km on the Masindi Port side.