July 2, 2018—Basil Ajer has been appointed acting Executive Director at the Uganda Investment Authority (UIA) to replace Jolly Kaguhangire who is being probed for various reasons including insubordination.

On Friday, the locks to the ED’s office were forced open after Kaguhangire declined to show up and  officially hand over the office to Ajer.  Some quarters did not take too kindly to Kaguhangire and UIA has suffered the consequences.

Other sources say, in her bid to make a favourable impression and in the shortest time possible, Kaguhangire stepped on too many toes and tipped over several proverbial carts since her appointment mid last year. She was formerly with the Uganda Revenue Authority (URA). 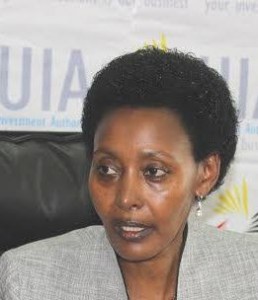 Kaguhangire’s working relations with not only the Board and senior staff frosty at times, she also had differences with the finance ministry itself.

But unlike her former URA colleagues Allen Kagina and Jennifer Musisi, who continue to stay at the helm of high profile institutions, Uganda National Roads Authority and Kampala Capital City Authority respectively, Kaguhangire’s reign has been brief and spotty highlighted by a poor working relationship with both staff and most importantly the UIA board.

Last week, the Board headed by Emely Kugonza interdicted Kaguhangire after receiving several complaints from the public and the Minister of Finance which has ministerial oversight. UIA has the basic job of coordinating new foreign business interest towards Uganda and encouraging FDI.

“The Uganda Investment Authority Board of Directors at its 51st meeting of 26th June 2018 held in the UIA boardroom has resolved to interdict you from office for a period of three months with the immediate effect from 26th June 2018,” part of the Interdiction letter reads in part.

The six accusations against Kaguhangire are; abuse of office, insubordination, misleading and lying to the Board and non-compliance with the implementation of the Strategic Plan in defiance of the directive of the Minister of Finance and Board of Directors on the one year implementation.

She has also been accused of closing the UIA Namamve office without authorization while also ‘serious”’corruption allegations have been made against her by some staff members.

Following the borad announcement, Kaguhangire later issued a statement indicating that her interdiction was illegal because the Board sitting had no quorum and one of the members had personal issues with her. However, the Board insisted on her removal by writing a letter to the finance ministry asking for some direction on the matter.

A select committee has been appointed to study the grounds of her interdiction and she is going to be given opportunity to defend herself.