November 8, 2018 in Business, Investment by Editor 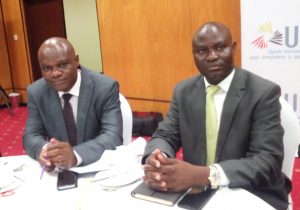 Kugonza (left) said there was no panic at UIA while Ajer (right) confirmed he was leaving after six months.

November 8, 2018—Uganda’s front office for attracting new business, the Uganda Investment Authority (UIA), has assured the public all is well.

This is in an effort to clean up its corporate image battered by the recent contentious departure of the Executive Director Jolly Kaguhangire.

“We do not have any internal conflicts or under panic. Everything is going well and we are fully performing our mandate of promoting investments for Uganda” Emely Kugonza who chairs the UIA Board told a news conference on Thursday.

Earlier this year the Board forced Kaguhangire out of office. It labeled her performance since being appointed in 2017, as being below expectations and she in turn resorted to the courts of law. However this process was halted when the Board agreed to reconsider Kaguhangire’s case if she withdrew her suit. The Board then listed Kaguhangire’s faults once again before formally sacking her and appointing Basil Ajer in an acting role.

The future of  UIA as an autonomous agency was also thrown into doubt after a government plan was disclosed which among other things will mean merging UIA with other authorities in the trade ministry.

When reviewing the first quarter investment licences on Thursday, Kugonza said although UIA experienced some challenges during the past months, it is now fully operationally and functioning well.

Ajer said although it i also true he had handed in his resignation with six months notice, he however is not leaving UIA because of misunderstanding with the Board or because the organisation is not performing.

“I am resigning to go and try out other opportunities. This is a normal change. If I was resigning because I am panicking, I wouldn’t give six months notice. I am willing to work with the Board in the process of getting a new acting ED and also help in the smooth transition so that the organisation can move forward after my departure” he said. 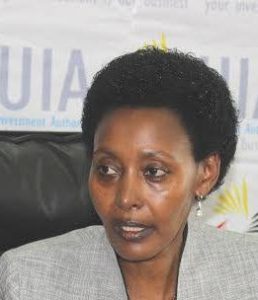 Kaguhangire’s tenure lasted about a year.

Ajer said, “Compared to other years when China, Europe and Kenya were our bigger investors, we are seeing new comers from Lebanon, UAE and India coming up. The increase in the investments are due to government policy towards value addition and the 10 year tax holiday for export-oriented investors.”