July 11—Uganda Investment Authority (UIA) is pondering where to access a multi-million dollar loan to pay for improving investment services in the country. 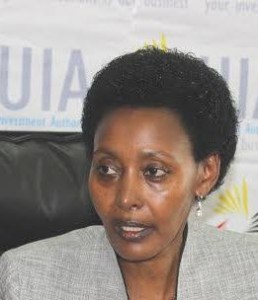 Kaguhangire said their budget allocation for this financial year was less than 20% of their requested $14 million.

“We are currently running under a deficit of over UGX41 billion (just over $11 million). We are currently thinking of getting a loan from development banks and other partners to finance our budget, because if we are underfunded by government, then we are unable to do our job correctly,” Jolly Kaguhangire, the UIA executive director has said.

She said the money would go to cover operational overheads, carry out media promotions and renovate industrial parks.

“We need UGX13 billion to improve the salaries of our employees, because they do a great job. Ten billion shillings will be invested in promotions to market our economy and the UGX18 million will be invested in industrial parks all over Uganda,” Kaguhangire said.

UIA had requested for UGX 50 billion (nearly $14 million) to finance its recurrent and development budget, but were only allocated UGX8.9 billion leaving a deficient of over UGX40 billion.

Kaguhangire was speaking at the three-month review conference that took place at the UIA head offices in Kampala. The conference was intended to review the first 100 days of the new executive director by highlighting her achievements, challenges and new plans.

Lawrence Byensi, the UIA Director of Investment Facilitation said they were planning to employ another 95 employees to add join the 55 that are already working with UIA.

The Authority will also sign Memorandum of Understanding with international media houses as well as some local magazines that will promote the country all over the world. In addition, the Authority will improve their social media presence on platforms like twitter, facebook and others.

UIA has  also hired a number of young researchers to help in tracking down investors to determine their impact on the ground and how many jobs they have created for Ugandans.