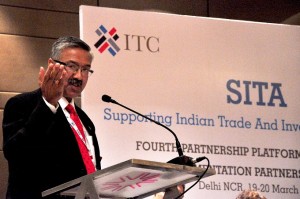 Mathur said once the guarantees are in place, the Exim Bank can provide investment money for Indian business people interested in Uganda,

June 6—The Export-Import Bank of India (Exim Bank) is ready to back Indian investments in Uganda provided it is assured of both government and investor guarantees.

“We are ready to lend money through the local banks that are on the ground to any Indian investor who wants to establish a business here in Uganda,” Yaduvendra  Mathur, the Exim Bank Chairman and Executive Director said in a meeting with Ugandan finance and investment officials.

Exim Bank has 203 Letters of Credit covering 63 countries with credit commitments of over $14.26 billion. Around half of this was signed up for African enterprises. During financial year 2016, nine LOCs amounting to $2.61 billion were extended. LOCs extended in FY 2016 were to Bangladesh, Congo, Cote d’Ivoire, Guinea, Guyana, Myanmar, Tanzania and Zimbabwe. Uganda has a relatively large Indian population involved in significant segments of the country’s economy be it retail, manufacturing and industry.

Mathur said, “India has a presence in Uganda through the many Indian companies that are very successful here like Mukwano Group of Companies, Ruparelia Group of Companies and many others. If there is a guarantee that the money will be recovered, we do not have any problem with funding any project.”

Matia Kasaija, Uganda’s finance minister, told his guests to take advantage of the country’s stability and potential business opportunities in different sectors of the economy. Over 40 Indian business people made up the delegation led by Mathur and while Kasaija was very welcoming, he also conceded that there are challenges.

These included relatively high electricity and borrowing rates, but these problems could also be balanced out with political stability, favourable investment policies and a low cost young energetic labour force.

Kasaija said, “Uganda is centrally located. We have a lot of unexploited investment areas and our big population that is young, educated and jobless would offer the best labour for your industries and businesses once there are set up here. Although we still have challenges as a country like corruption and electricity, we are working tirelessly on those challenges so that they can be resolved soon. Investing in Uganda at this time will be a very good adventure for any foreign.”

Sheila K. Mugyenzi, the deputy Director  Investment Promotion at the Uganda Investment Authority said Uganda’s 35 million people, its $27 billion GDP and above sub-Saharan average growth rate makes it a fresh ground for investment because there is plenty of room for new projects and development.

“We have a lot of areas where you can invest like the agriculture sector which needs to be modernized, technology, housing, education, health and many other sectors. All these areas need funding and we can guarantee that you will recover your money and get  profits in a short time, because we offer tax holidays and other incentives that make it favourable to do business in Uganda,” Mugyenzi said.