December 14—Western Kens Export, a Bangalore-based producer of clothing in southern India, has expressed an interest […] 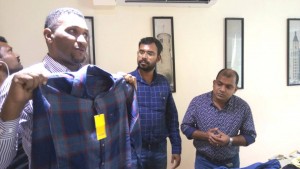 Officials from Western Kens Export said in the beginning, they will hire 600 workers for the factory, but not much else in terms of details was forthcoming.

December 14—Western Kens Export, a Bangalore-based producer of clothing in southern India, has expressed an interest to set up a small operation here offering employment to an initial 600 people.

“We need support from Ugandans so that we can have more courage to build the factory here. Our coming here will mean that traders will not have to travel to China to import shirts. We shall bring quality right to their eyes,” Shabid Ali told 256BN recently during an exhibition in Kampala.

The race to find the lowest production costs is causing several garment makers to focus on eastern Africa, specifically Ethiopia and Kenya, but Uganda can also cash in if the right incentives and infrastructure is in place. Usually such support centres around the availability of generous tax holidays. However critics say tax holidays only encourage some so-called investors to import 80% to 90% finished goods as inputs and after little value addition sell these items at knock-down prices.

According to Mckinsey, the business consultancy, Ethiopia’s wages for garment workers are among the lowest globally, at below $60 per month, and work-permit costs for foreign workers are less than one-tenth those in neighboring Kenya.

The garment industry in India is currently facing tough competition from countries like Bangladesh where production costs are even lower than India’s. Due to a tariff-free trade pact with that country, Indian clothing dealers are sourcing their supplies from there rather than locally.

Kenya’s apparel industry currently specializes in supplying high-volume bulk basics such as trousers, which account for 58% of its exports to the United States under the AGOA trade preference deal. The typical minimum order size is 10,000 pieces; the country’s larger players have minimum order sizes of 25,000 to 50,000 pieces.

Although Uganda used to be a notable cotton producing country in the years up to the early 1990s, interest among farmers has since fallen off due to low farm-gate prices. Uganda is yet to find a winning model to exploit its easy access to the US market with biggest complaint being high overhead costs, including difficulties in maintaining a stable logistics chain.

Fredrick Temanju, the regional manager for the company said.”  Since our products are 100% cotton and authentic, customers all over the country will be able to receive the best quality at an affordable price.”

Western Kens Export officials said they hope to start operations in the country early next year with plans to expand into other countries like Kenya, Rwanda, Tanzania,  the Democratic Republic of Congo, and Burundi.

Mckinsey say manufacturers and buyers alike said that another challenge of doing business in Kenya is comparatively high labor costs, with monthly wages for garment workers in the $120 to $150 range. Energy costs are also high, and because the power supply is spotty, factories often have to rely on generators. In Africa, power from generators works out to be four times as expensive as power from the grid.

Like Ethiopia, Kenya will need to address compliance and risk issues if it is to attract more international buyers.