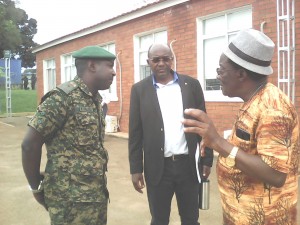 Eng. Kiggundu (right) makes it clear to all concerned that Energy Infratech officials must vacate the construction site immediately.

September 19—Energy Infratech Pvt Limited (EIPL), the Indian consultancy firm whose contract for supervising Isimba Dam construction was not renewed by the government, has been given an ultimatum to present an official handover report by the end of the week.

This comes after company officials asked for yet more time to finish the report which had been expected last Thursday in another aborted handover ceremony. Money to pay for the proposed 183MW dam is being sourced from China and specifically, the Exim Bank. However, the government has not been happy in the way the Indians have overseen the $600 million project during the past three and a half years.

“We do not have any more time for your excuses and we will not tolerate any more delays. This is final. We want you to pack your things off these premises. That includes all your families. Today is the last day you will ever set foot on these premises,” Eng. Badru  Kiggundu, who chairs the project steering committee told the Indians late last week at the site,  about 100 kilometres east of Kampala.

He said, “If the report is not ready, we are giving you one week to prepare it from your offices in Kampala. The offices here have to be used by the new team that we have selected to take over from you. We cannot continue to transport officials every day from Kampala to here because of you.”

Earlier, these officials became visibly agitated after Said Srujay Kumar, an official from EIPL said, “We have drafted a handover copy, but there is a lot that needs to be done before we can make a handover. We ask for more time to finalize the report and to find another residential option for our families.” 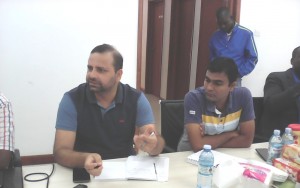 Kumar’s request for more time was quickly turned down by Eng. Kiggundu.

It is at this point Eng. Kiggundu told the consultants to vacate the site offices and retreat to their Kampala facilities to finalize the handover report.

Eng. Harrison Mutikanga, the UEGCL managing director, said the government was not able to add any more time to EIPL, because they had given them the notice sometime back. However, they have been hesitant to hand over and vacate the place; a thing that is causing government extra costs.

“The issue about your families is not a big one. You have offices and a guest house in Kampala. You can take them there as to make further arrangements. As for the final reports, you will also have to complete them at your offices in Kampala. There is no more space for you here at this site,” Eng. Mutikanga said.

Kiggundu also announced that they had formed a team with representatives from MEMD, security organizations, UEGCL, RDC and GISO to make sure that the handover of government properties like cars, offices and residential houses is done in the right manner.

Allan Kyagungu, the UPDF officer in charge of national vital assets and strategic installations, asked the officials from EIPL to follow the appropriate directivs without any further delay or face forceful eviction.

Kyagungu said, “We do not want anyone here to misuse the diplomacy between our two countries. We have had enough discussions about these issues. President Yoweri Museveni will be visiting this place soon and we do not want this issue to still be on the table. I order the concerned party to move out of this room and go start the hand over process.”