International market prices for several key commodities such as coffee, have been falling since the beginning of the year.

May 10—The International Monetary Fund (IMF) can cause many a head of state or finance minister to growl in frustration, but the Washington-based institution never tires of encouraging and sometimes bullying governments to live within their means.

Sub-Saharan Africa’s growth has fallen to its lowest level in more than 20 years. Hard times call for harder decisions on spending priorities.

The IMF approves of the current multi-billion dollar projects to modernize Africa’s creaky infrastructure, but does not want governments to take on excessive debt, especially now when commodity prices are falling.

The just released Regional Economic Outlook for sub-Saharan Africa offers a mixed bag of scattered winners and a host of losers. At 0.5%, there was barely any growth in South Africa and Angola while Nigeria saw a contraction of its economy at -1.5%. Most of the East African Community countries do not fare too badly and are well above the average  1.4%  for the whole of sub-Saharan Africa in 2016. Four EAC countries are growing above 4.5% with Tanzania leading the pack at 7%.  Overall, Ethiopia and Cote d”Ivoire are the pacesetters at between 7.5% and 8% however Kenya (6.5%) and Senegal (7%) have attracted the most IMF scrutiny.

‘While some countries like Senegal and Kenya continue to experience growth rates higher than 6 percent, growth has slowed for two thirds of countries in the region bringing down average growth to 1.4 percent in 2016’, the report states.

A modest recovery in growth, to 2.6 percent, is expected in 2017, but the report said the underlying regional momentum remains weak, and at this rate, sub-Saharan African growth will continue to fall well short of past trends of 5%-6% percent, and barely exceed population growth.

Abebe Aemro Selassie (right), the Head of the IMF’s African Department, said strong policy decisions could turn things around. Usually, this is a polite way to say governments should pay closer attention to their central bankers opinions, rein in expenditure and limit borrowing. 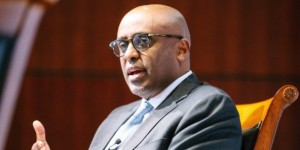 “Sub-Saharan Africa remains a region with tremendous potential for growth in the medium term, but with limited support expected from the external environment, strong and sound domestic policy measures are urgently needed to reap this potential,” Selassie said.

While noting that many countries suffered a very substantial commodity price shock, the report also points to insufficient policy adjustment to account for the broad-based slowdown in growth momentum in the region. This is especially the case among commodity exporters, notably oil exporters, such as Angola, Nigeria, and the countries of the Central African Economic and Monetary Union (CEMAC). According to the report, the delay in implementing critical adjustment policies is leading to higher public debt, creating uncertainty, holding back investment, and risks generating even deeper difficulties in the future.

Vulnerabilities are also emerging in countries that do not rely significantly on commodities for their exports. While these countries—such as Cote d’Ivoire, Kenya, and Senegal—have generally maintained high growth rates, their fiscal deficits have been high for years, as governments rightly sought to address social and infrastructure gaps. But now, consequently, public debt and borrowing costs are on the rise.

The report also shows that, while the external environment has recently become more favorable, it is expected to offer only limited support. Improvements in commodity prices will provide some breathing space, but will not be enough to address existing imbalances among resource-intensive countries.

Oil prices for example, are projected to stay far below their 2013 peaks. Likewise, while they have been on a declining trend since early 2016, financing costs for frontier economies in the region remain higher than for other emerging markets, and they could rapidly tighten further against the backdrop of fiscal policy easing and monetary policy normalization in the United States

The outlook is also clouded by the incidence of drought, pests, and security issues, according to the report. While the impact of the drought that hit parts of southern Africa last year is fading, food insecurity appears to be rising with parts of southern and eastern Africa facing drought and pest infestations. Worse still, famine has been declared in South Sudan and is looming in northeastern Nigeria as a result of past and ongoing conflicts.

The IMF thinks governments should give priority to put renewed focus on macroeconomic stability in order to set the stage for a growth turnaround. For the hardest-hit countries, fiscal consolidation remains urgently needed to halt the decline in international reserves and offset budgetary revenue losses, especially in the CEMAC. In addition, where available, greater exchange rate flexibility and the elimination of exchange restrictions will be important to absorb part of the shock. Meanwhile, for countries where growth is still strong, it will be important to address emerging vulnerabilities from a position of strength.

Finally, the third priority should be to strengthen social protection for the most vulnerable people. The current environment of low growth and widening macroeconomic imbalances risks reversing recent progress made in alleviating poverty. Existing social protections programs are often fragmented, not well-targeted, and cover a small share of the population. The report suggests savings from expansive and untargeted schemes such as fuel subsidies could be put towards helping vulnerable groups.